I love the four-hour return walk to the beach at South Cape Bay from Cockle Creek (as far south as you can drive in Australia) for the huge variety of landscapes you see on a relatively short and easy walk. Starting off in dry eucalypt forest, you hit a section of boardwalk through what would be a swamp if we'd had more rain, then buttongrass plains, followed by sections of humid rainforest and streams before reaching the dark grey cliffs and white sands below, waves pounding on the shore. When our little party walked it on Sunday, the weather was as varied as the scenery. It's wild and remote and so so beautiful. 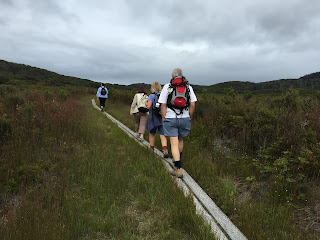 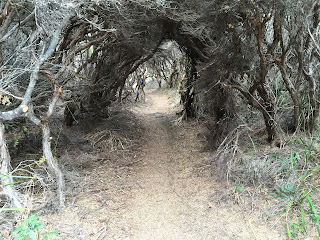 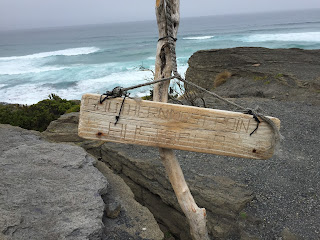 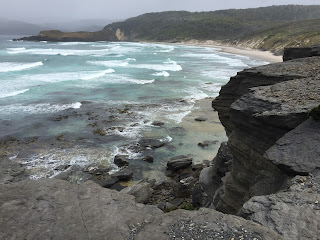 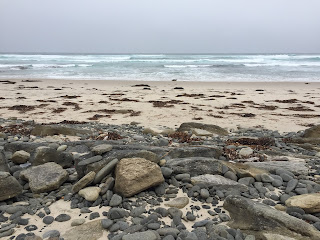 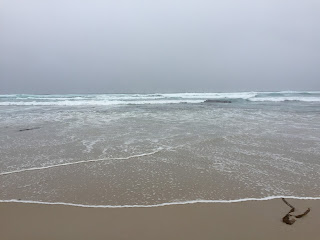 Franklin-based scriptwriter and film director Darren Swanson entered the 48-hour Tasploitation Challenge again this year (after this awesome entry two years ago) and when he asked David and I if we'd like to help out, we jumped at the chance. In a nutshell, teams have to produce a short horror film over a weekend. On Friday night, you are given three 'prompts': a sub-genre of horror for your film, a line of dialogue and a prop that must be used in the film. You then have two days to make and edit a film of up to six minutes and get it in to the judges on Sunday night, for screening on Monday night. Phew!

The sub-genre we got was 'paranoia and madness' and the film had to include a line from a David Bowie song and a paintbrush. We filmed at night. Darren had roped in a fantastic cast and crew, including a director of photography and lighting, camera operator, editor, boom operator and make up artist. David played the main character, a baker who wanted to catch a repeat burglar in the act. I helped out with props and anything else that needed doing on the set (a.k.a. the Franklin Post Office). It involved (shaving) cream pies, fake blood and synthetic drool. While our fantastic actors got their scary on, the most frightening thing I did all weekend was put contact lenses in another woman's eyes! It's one thing putting my own lenses in, quite another poking around in someone else's eyes... but I think you'll agree the effect was totally worth it (see below).

It was exciting going to the screening of all 26 entries in the Tasploitation Challenge last night and getting to see the result of everyone's creativity and hard work on the big screen. Thanks for the opportunity to be involved, Darren! 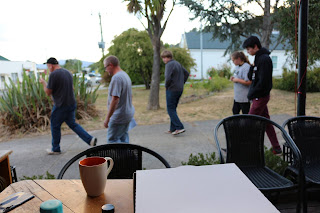 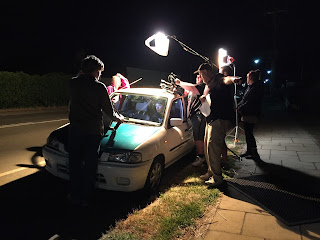 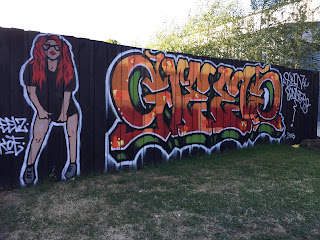 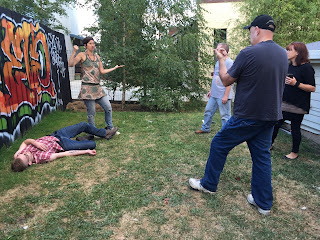 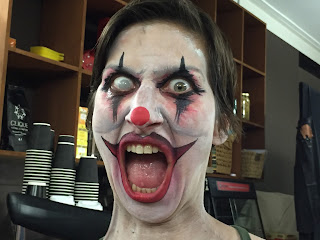 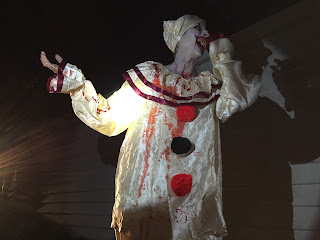 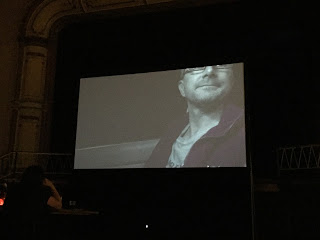 It's that time of year again. Piles of snow peas and broad beans ready to pick every day. Our freezer now contains zip lock bags full of blanched broad beans to eat throughout the year. Add some of the lovely chorizo from Mount Gnomon Farm bought from the farmer at the Farm Gate Market just before Christmas, and you have one very tasty risotto. Actually it was the first risotto I ever made. I'm not normally a fan of what The Katering Show's McCartney and McLennan call 'hot wet rice'.  Check out the hilarious 'Thermomix' episode for an explanation. My other favourite broad bean recipe was recommended by a friend, Pauline. It's for broad beans with parsley, feta and almonds and it is a very quick and delicious way to eat them. Do you have a favourite broad bean recipe to share? 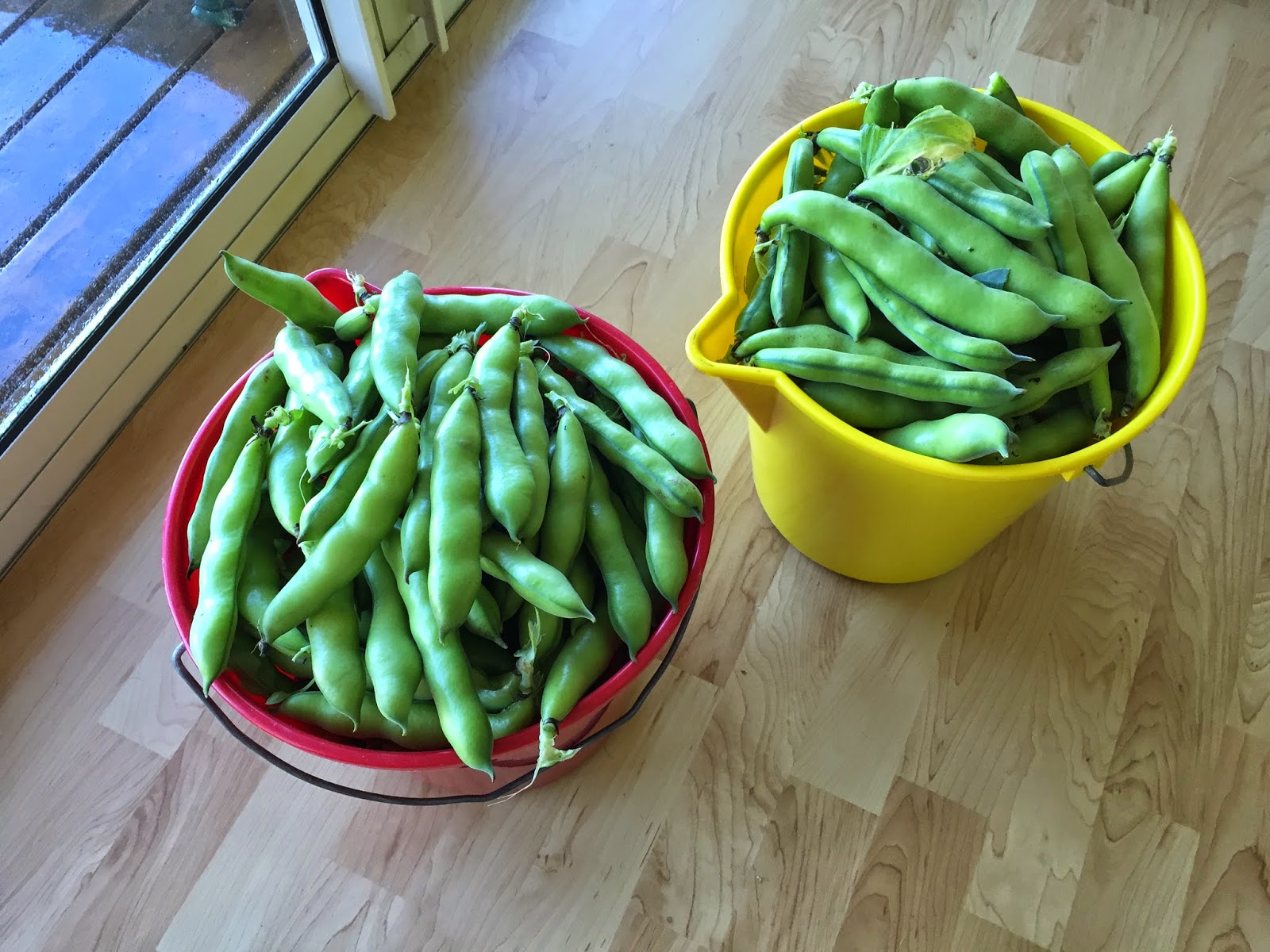 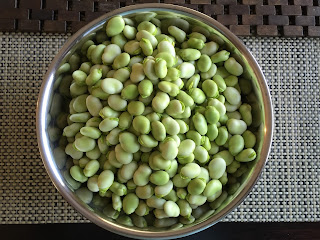 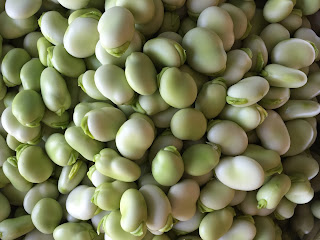 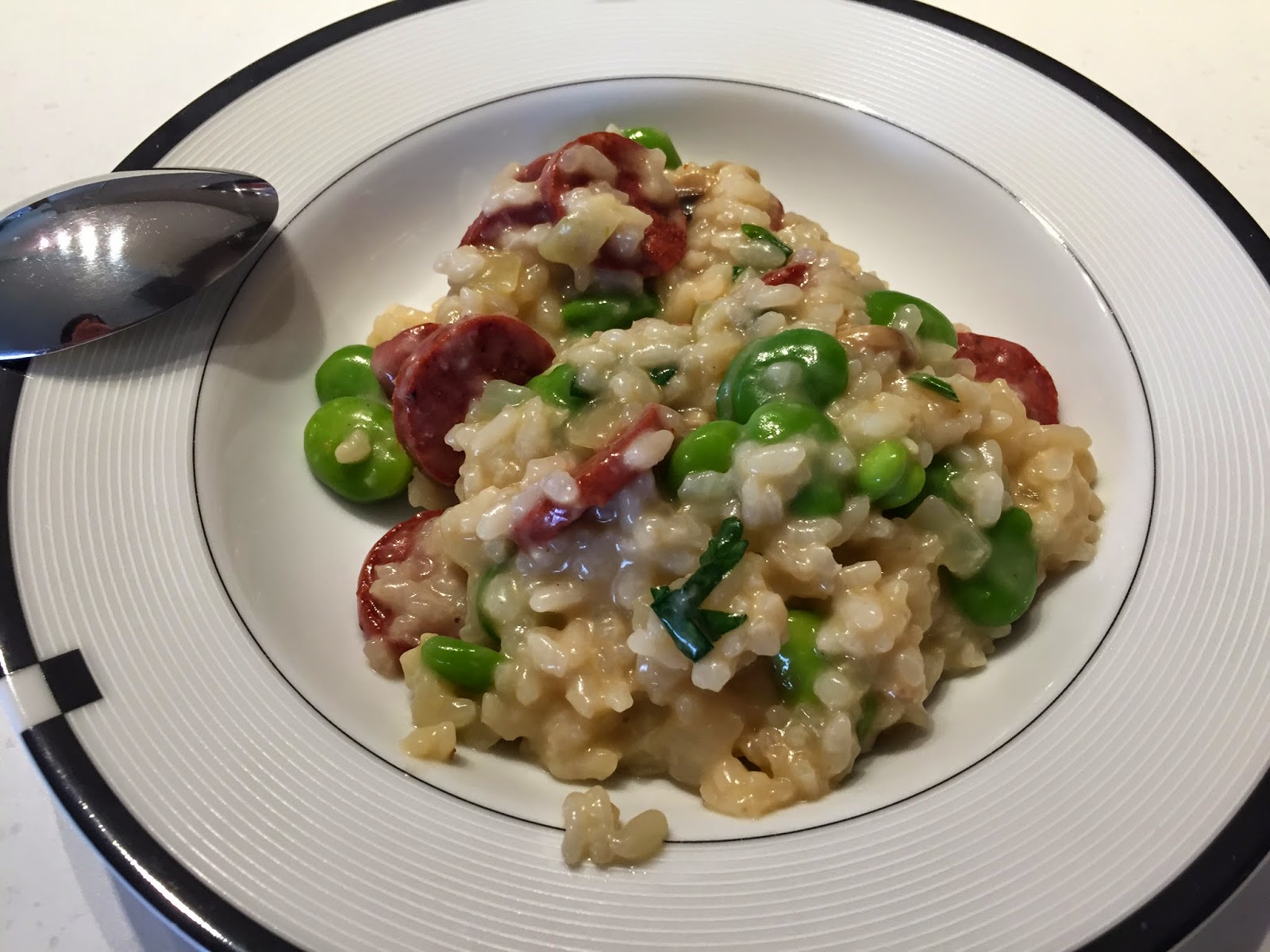 It's a scorching day out there. About 35 degrees and low humidity. After our cold and snowy winter, summer has been so warm and dry it's hard to believe this is Tasmania. Our neighbour's tanks are dry and they've been getting water delivered to fill them up. Some towns in Tasmania are now on stage one water restrictions. Pressure is mounting on the Tasmanian government to declare drought. It's often said that Hobart is Australia's second-driest capital city after Adelaide, but boy it sure is dry this year. Up here in the hills, we normally get plenty of rain in spring. 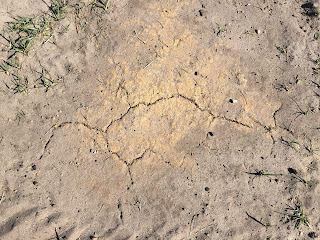 In October, a man with a digger came and leveled off the grass area at the back door, because in winter the water wasn't draining away and it was like a bog. I sowed grass seed afterwards, just as we hit an incredible dry spell, with winds that whisked away most of the top soil to who-knows-where. Unsurprisingly, the seed failed to germinate. I tried again a couple of weeks later, timing it the day before an expected downpour. This time, the grass did start growing but we've hardly had a drop of rain since. The earth is cracked, parched and dusty. As much as I hate the idea of wasting water on grass, I've been out there with the hose a couple of evenings. People often comment how lush and green the grass looks in my photos (like in the header above) but here's what it looks like now. Complete with Gretchen's favourite blue toy. 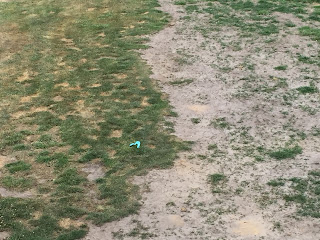 Posted by Susan Moore at 4:18 PM No comments:

Coming back from closing up the chook shed on Friday, I heard a little bird tweeting like crazy on the fence near the water tank. It was a fairy wren, with his bright blue feathers and pretty song. David had heard him too, and it turned out he had something to be chirping so furiously about. A dark shadow was hanging out near the water tank - snake alert! David fetched the hose and directed water at the snake until it slid out of the yard and off down the driveway. 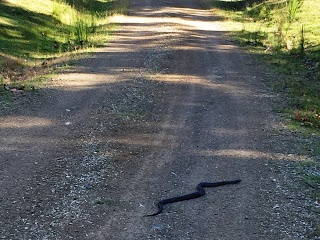 I don't know if it was a tiger snake or a copperhead, and it wasn't a large snake, but I don't really care. I don't mind snakes but we don't want them close to the house or in our yard in case one of the dogs decides it looks interesting and gets bitten. We'll have to listen out for the fairy wren alarm in future. I was talking to a woman on the weekend whose family has lost a couple of dogs to snake bite, including a big St. Bernard... terribly sad. I've mentioned before that Tasmania only has three kinds of snakes, all of them venomous but very unlikely to kill you. It turns out that despite Australia's reputation for deadly critters, our snakes are a lot less dangerous than people think.
Posted by Susan Moore at 11:45 AM No comments:

For all you chicken fans out there (and I know there are a few), here are some baby photos. From 20 eggs in the incubator, nine eventually hatched. Unfortunately the last two chicks to emerge from the shell had something wrong with their legs and feet and just as I was considering whether I should dispatch them or try to correct the problem, both died. Of the remaining eggs, one chick partly hatched but didn't make it out of the egg, four died early on in their development and six eggs were infertile. But I'm happy with seven healthy chicks, now cheeping, scratching and pecking about in a box in the garage. They are super cute. Hopefully there will be a few hens among them, as our little flock is down to only a few hens plus Sebastian. 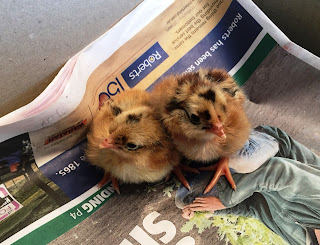 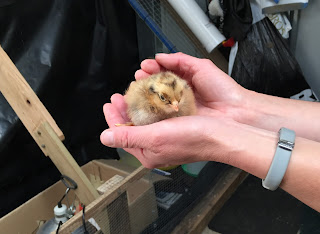 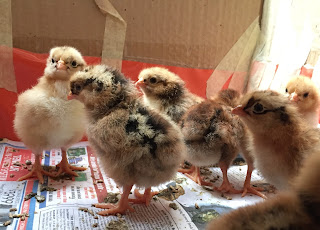 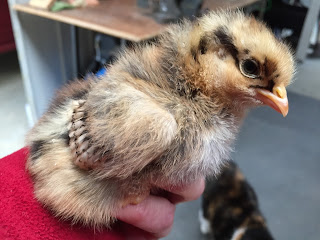 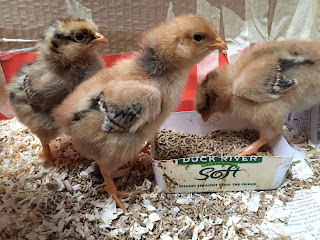 A berry happy new year to you

This time of year is THE BEST. It's fruit heaven. Yesterday morning I bought more big fat cherries from a local orchard, after gorging on them over Christmas. In the afternoon, my neighbour arrived at the back door with a home delivery - a large bowl of raspberries - and a few blackberries as well. Meanwhile, I picked three lousy raspberries from my own canes yesterday. The secret to my neighbour's success with raspberries? Dead animals, apparently. I believe him. He composts dead chickens and roadkill wallabies by burying them under the raspberries, along with a little blood and bone. Unfortunately, I planted my raspberries inside the yard, and if I dig in stuff like that the dogs would dig it up again for a tasty treat. I'll have to move them next winter. 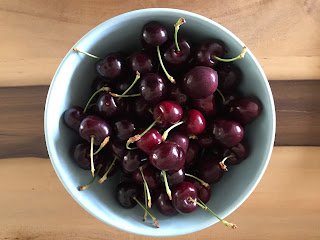 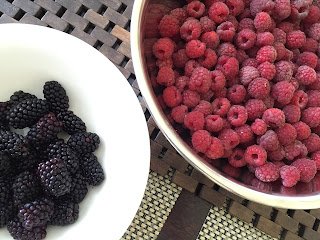 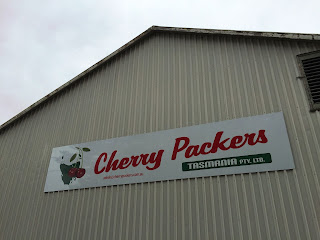