In Sunday's perfect, sunny spring weather I walked up Grey Mountain (830m) as a test run for a walk I am leading for our social walking group in December. Grey Mountain is the tallest and second peak from the right in the header photo at the top of my blog. We see it every day from our house, as it changes colour in the afternoon sun or disappears inside a thick grey cloud. And most importantly, it's where our internet and mobile phone service come from. We can just see the two communications towers on top in clear weather.

Almost exactly two years ago I attempted to walk up there from the other side, from Van Morey Road at Margate, as per the instructions here. It was a horrible clay bog in pouring down rain and I ended up turning back. It was a much nicer walk leaving from the Cradoc Hill Abattoir yesterday. It's a steady climb entirely on 4WD tracks and then up the access road to the communications towers. However the views are lovely, stretching to many of the peaks in southern Tasmania and out to Bruny Island. The birds were busy and the wildflowers were out in the bush at the top. I plan to walk up there from Cygnet one day too. 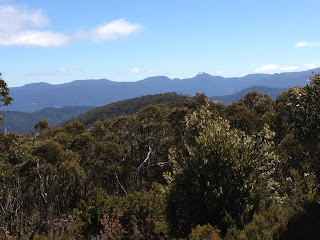 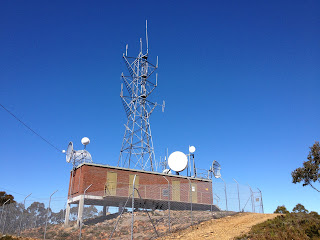 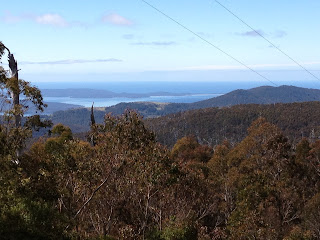 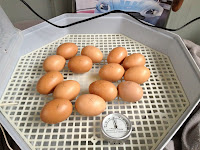 We want to increase the size of our small flock of chooks. Unfortunately none of our young hens have shown any signs of broodiness. I thought one was last year, as she spent an awful lot of time sitting on the nest, but after a week or so she got sick of sitting on the fertile eggs I placed under her and got up, desperate to get out of the broody box. Barnevelders are not a breed of poultry known for being good mothers. So I bought a small egg incubator and put the first lot of eggs in it last week. After reading the troubleshooting guide (which features a cover photo of two cute chicks toting guns - not women, I mean actual chicks of the fluffy yellow variety - weird) I'll be amazed if we get any live hatches given the extensive list of what can go wrong. But in the meantime I'll keep turning those eggs and checking temperature and humidity for the next two weeks and keep my fingers crossed.
Posted by Susan Moore at 9:58 AM 3 comments:

A few months ago, we found a bettong hiding in our chook shed. There was clearly something wrong with him. He wasn't making a great effort to run away, and when he did, he fell over sideways. Oh dear. It didn't look good, but we wanted to get him to someone better qualified to assess him. We tried a couple of local wildlife rescue numbers with no luck, but one of them suggested calling Bonorong Wildlife Sanctuary. It's well on the other side of Hobart from us, and it was after hours, so I didn't hold out much hope. However a very helpful and friendly bloke answered the phone and said he would send a text message out to wildlife carers in our area to see if anyone could collect him. A short time later another helpful and friendly bloke named Jonas called back, and I was able to drop off the bettong to him at the end of our road. The poor creature did not survive, but I was grateful that his end was kind.

I've been keen to visit Bonorong for ages so we finally dropped in on the weekend. If you want to see Tasmanian wildlife up close, it's a top spot. We saw a baby wombat, Tasmanian devils, spotted-tailed quolls, eastern quolls and many more. The site has beautiful views back to Hobart and Mount Wellington. And I'm happy that the entry fee goes to a good cause, supporting care and rehabilitation of native animals and helping kind people like Jonas to help our native wildlife. 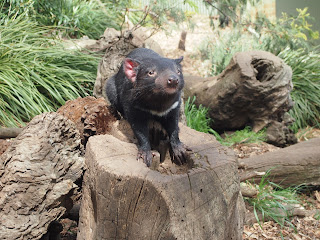 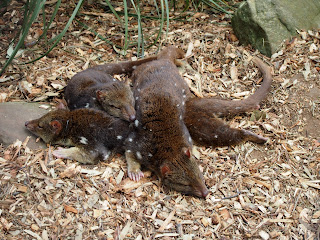 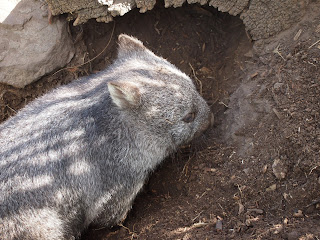 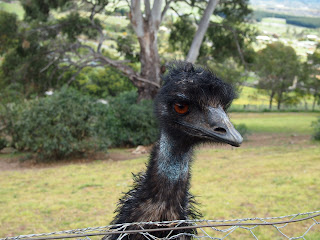 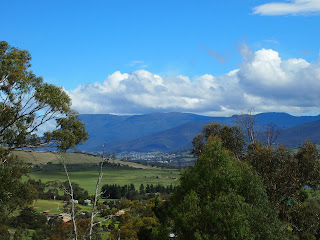 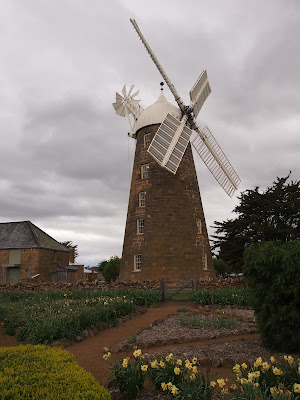 With my mother-in-law visiting over the weekend, we took a drive up to the beautiful midlands town of Oatlands and stopped in at Callington Mill. Aside from the lovely buildings and gardens and their interesting history, the scones made with the organic flour milled on site were very good I must say.
Posted by Susan Moore at 8:17 PM No comments:

A spring in her step

Spring has even warmed the bones of our elderly cat Lilly, who has emerged from her cosy heated bed where she spent much of winter and has taken to following me down the driveway to the chook shed and around the paddocks. It's lovely to see her basking in the sunshine again. 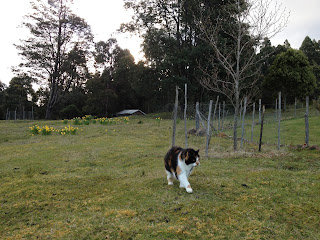 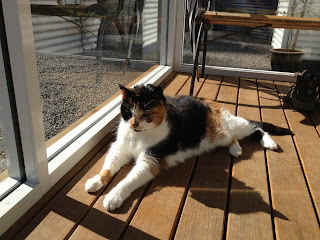 Posted by Susan Moore at 2:00 PM No comments:

What's growing in the garden?

Taming is the wrong word really. But Russell the Rooster, who likes a good fight as much as his namesake Russell Crowe, has become difficult to live with and something must be done. 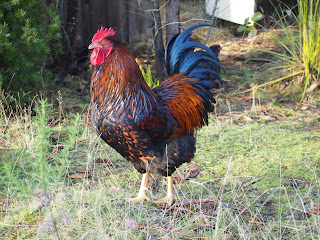 It started out harmless enough. Occasionally if I walked straight towards him, he would charge and flap at my legs. At first I gave him a boot or stamped at him, largely out of shock or gut reaction, but quickly noticed that just made him come back for more. I then tried the approach described by this blogger - not fighting back, ignoring him, showing that I had food so it was clear I was not a predator or another rooster. It made good sense to me and for the most part it worked. Until the last week or so that is. Spring has made Russell more randy and aggressive than ever and it got to the point where it was hard for me to get into the chook shed to collect eggs and put out feed. If he saw me walking towards the chook shed, he would RUN from wherever he was and chase me, flapping and kicking. It was worse if the hens were following me for food, as they do. When I let the birds out in the morning, it was previously easy to distract him with a bit of food and he'd do a funny little dance and cluck for the ladies to come over, forgetting I was there. Last week he just came out fighting. It's a good thing I'm always wearing jeans and wellies or my legs would have sustained worse injuries than a few little scratches and bruises.

So after talking with chook man Paul Healy about it at a Huon Eldercare fundraiser in Franklin last Friday night, I decided to try a more aggressive approach. I put David's large gardening gloves on and went to let the chooks out. As soon as I went into the shed, he flew at me and I copped his spurs in the thigh. Ouch. I held him with both hands gently but firmly on the ground in the shed. He struggled for a while, but eventually he was still. The hens were most perturbed and started up a chorus of loud clucking. Once he had been still for a few minutes I let him go and opened the door, half expecting him to have another go but he didn't. He shook himself off and went outside, doing that weird little dance around some food scraps again.

I wasn't convinced it was a good approach and sure enough last night I got the chance at a local business dinner to ask animal behaviourist Jade Fountain for advice. This is a lady who has trained dogs, chickens and even cheetahs - I'm not joking. Sure enough, I've probably just made the whole situation a lot worse because fear is half the problem. Apparently, I should offer him some food that he likes, protect myself with some kind of armour, not react and back away - basically he just wants me out of his space and once he knows I'll be leaving he'll be a happy chook again. Now I just feel plain depressed about it and don't know what to do. If I can't stop him attacking me, I'm afraid he's for the pot. That would be a great shame, as he's a very handsome bird and is doing the job I wanted him for - protecting the ladies out on the range and fertilising eggs. If you have solved an aggressive rooster problem before (other than by dispatching him), I'd love to hear how it went.
Posted by Susan Moore at 6:49 PM No comments: 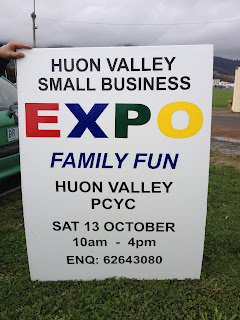 My other half has been working very hard on a special project - helping the Huon Valley Business Enterprise Centre to host its first ever Small Business Expo. It has amazing support from businesses around the Huon area - more than 60 of them actually.

So now it's your turn. The Huon Valley is well known for great produce and tourism ventures, but there is a huge variety of local businesses here doing interesting things - including many you may not know about. Please come along and check them out.

There will be food and drinks, a playground for the kids, samples and demonstrations and much more.

Hope to see you there.
Posted by Susan Moore at 8:00 AM 2 comments:

Walk to the old mill 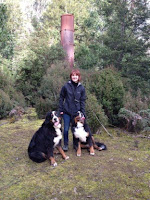 There's all sorts of stuff hidden up in the forestry areas in the hills west of the Huon. Around half an hour's walk from our house you can find an old logging mill site strewn with rusted old boilers, trucks and other machinery. We first walked there more than two years ago, and on Sunday afternoon we went again, this time with the two dogs. The route goes from the forestry gate at the top of New Road in Franklin and in fact follows the road as shown on most maps but for the last part it's no longer a road. We've offered to lead a walk there for the Huon Valley Dog Walking Association, but now plan to leave it until the cooler months again due to risk of snakes. It's a lovely short walk, full of sounds of the bush like lyrebirds. Once on an early morning walk I heard screams of Tasmanian devils. I've seen one dead one and a live one nearby, so we know they are around. 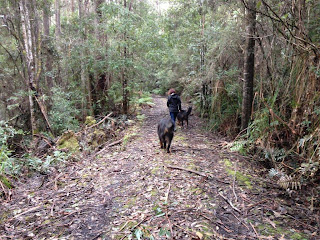 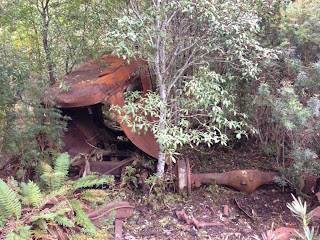 Posted by Susan Moore at 7:00 PM No comments: 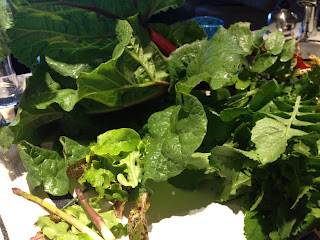 Saturday night's dinner was a local affair. It consisted of a nice steak from nearby Geeveston, baked potato chips from Dutch Cream potatoes from Franklin and a salad of stuff picked from my own garden - lettuce, radish, some asparagus spears, shallots. That was followed by a rhubarb and pear crumble (rhubarb my own, pears from Woodside Orchard in Franklin). The hens provided some eggs for breakfast the next morning. I still don't have much at all growing in my garden, so I was quite proud to make a tasty meal out of the random stuff I harvested - while it was pelting down snow, mind you. Things are slowly starting to happen out there.

Posted by Susan Moore at 9:00 AM No comments:

This year, we're celebrating Oktoberfest twice. Yesterday the nice people from our car club hosted the annual Oktoberfest BBQ at the beautiful Waterworks Reserve in the foothills of Mount Wellington. If you're looking for somewhere near Hobart to hold a gathering, this place is great, as you can book one of the nine shelters that come complete with tables and gas or wood barbecues, so it doesn't matter much what the weather throws at you. The reserve is a lovely little piece of history. Cheeky kookaburras and ducks move in the second the grill is lit. Next weekend we're doing it all again, this time at home. Nice wheat beer, good sausages, sauerkraut and mustard... what's not to like? 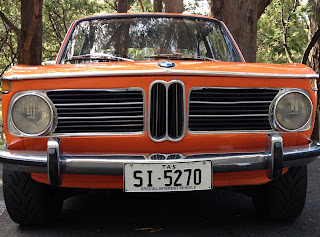 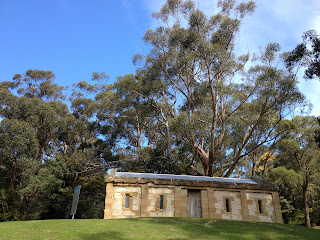 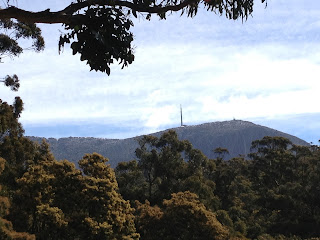 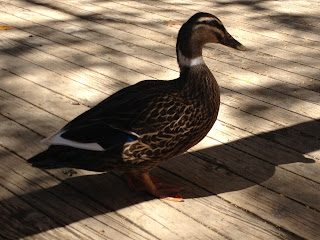