We were under the impression that life outside the big city would be quieter, more peaceful, with plenty of spare time for simply sitting and admiring the view. The opposite has turned out to be true. Well, it's definitely quieter in terms of noise (I find it hard to sleep in Sydney hotels these days due to the traffic noise) but not in terms of things to do. In fact, we find ourselves doing much more here than we ever did in Sydney, partly because it is so much easier. It's easier, quicker and cheaper to drive into Hobart to see a movie or a show or eat out than it was to do so in Sydney. And then there is so much to do in our own local area, and even more as the weather warms up and festival season starts in Tasmania.

The most stressful period at work for me ended at the start of this month. I flew back to Tasmania on the Friday afternoon after a week working at a conference on the Gold Coast, a fantastic event that takes months of preparation from many people and creates a lot of pressure. It's the same every year, so I know what to expect, but that doesn't make it any better. That night we dressed up and went to a Halloween Ball in the Franklin Palais. Saturday morning there was unpacking, chores... on Saturday afternoon, American guitarist Richard Gilewitz and local musician Steve Gadd played at the Palais. Friends handed over a large bucket of herbs from their garden for our chooks. We had a lovely home meal. Sunday afternoon we spent at the 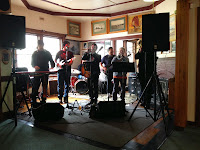 Longley International Hotel enjoying smooth ska and reggae from Hobart band Lively Up! (right) and on Sunday night we were back at the Palais for the monthly movie, this time a truly terrible French film called 'Breathless', enjoying a chat over shared plates of food at interval. The weekend was so full, I didn't have time to worry about the past week, what needed doing or what lay ahead. My left eye stopped twitching, the chest pains stopped and my right arm (the 'mouse arm') stopped aching. I felt brain dead, but happy.

We love the social aspect of life here, going to functions where you know half the room, trying and seeing new things that we might otherwise never have done in Sydney because it was all too hard. If you think moving to 'the country' means becoming a hermit, think again... unless that's what you want, of course.
Posted by Susan Moore at 7:30 AM No comments: 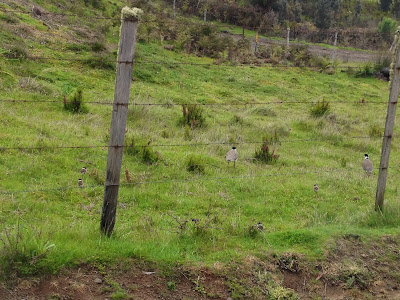 You'll have to look hard to spot them, but in this photo are FOUR tiny plover chicks (more accurately known as masked lapwings, but everyone seems to call them plovers) following their parents across our front paddock. This pair have been hanging around our place for at least three years and to date have been spectacularly unsuccessful at breeding - they kept laying their eggs in the dog yard around our house, which Gretchen found to be a tasty treat. But finally they moved into the neighbouring paddock and have produced these four adorable chicks. Here's hoping they all survive until adulthood.
Posted by Susan Moore at 3:36 PM No comments:

What's growing in my garden?

It's been nice to eat stuff from our own garden again. Lettuce, spinach, herbs, broccoli and mini cauliflower all grown in the greenhouse came first, but soon we'll be enjoying a bigger variety of fresh, tasty produce.

Posted by Susan Moore at 9:01 AM No comments:

It's been a stressful night and morning. On the way back up our road yesterday evening we saw two beautiful little quolls, one the pale spotted variety and the other dark. One was eating a dead pademelon lying on the road. David got out of the car and dragged the carcass into the bush, as what often happens is that the animal eating the roadkill then ends up roadkill themselves.

When we got home, a little later than anticipated, it was dark and unfortunately a quoll had visited us too. I hopped out of the car at the bottom of our driveway to go and lock up the chooks. In the shed, it looked like the birds had exploded, hundreds of feathers everywhere. And no hens or Russell the rooster to be seen... then I spotted one apparently unharmed hen crouched in terror on the windowsill of the shed. Outside, I found more feathers everywhere and another hen crouched under a water tank. She was clearly in a bad way... rushed up to the house to get David's help to catch and kill her. At the risk of horrifying readers, she had been half eaten alive. One hen and the rooster were missing. And all my own fault for letting them outside to free range and not getting home before dark to lock them up. I felt so sad for the sole remaining hen. She is my favourite, one of the chicks we bred last year who likes to chase and follow me.

Then on opening the blinds this morning, David spotted a hen in the front paddock. We managed to herd her towards the shed, then catch her and check her over before putting her in the shed. She has lost some feathers but clearly has injuries worse than I can see, as she is making a gurgling noise when she breathes. We found poor Russell cowering near the back door. He has a leg injury and a gash and bruising on his back. Both are currently resting in the dark and quiet of the shed. I am not sure if they'll survive. A sad day in chook land. It's sometimes hard to believe that such a cute little animal can wreak such havoc.
Posted by Susan Moore at 8:51 AM 6 comments:

After what seemed like weeks of rain, last weekend the sun came out and showed Hobart and the Huon at its best. Perfect timing too, as there was a lot on around town including annual events like the Huon Show, the Myer Christmas Pageant, Beerfest and more. I missed the Huon Show for the first time since we moved here. David went, primarily to eye off the tractors I think... but he didn't come home with one. I was at the final 'linking session' for this year's Tasmanian Leaders program in Hobart. As always, it was an amazing couple of days.

So on Sunday, it was time for our dogs to have a good time too. We headed straight for the dog beach at Kingston, followed by an ice cream on the esplanade, spent time in the garden in the afternoon, and finished up with the first BBQ of the season as the sun set in the valley and the dogs chomped on enormous bones on the grass. 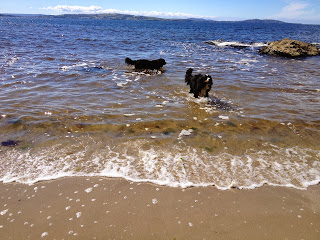 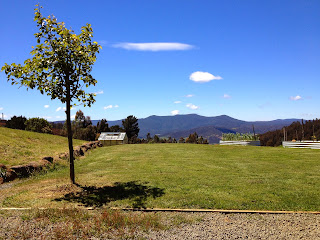 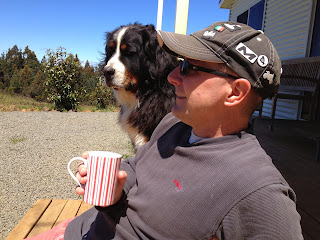 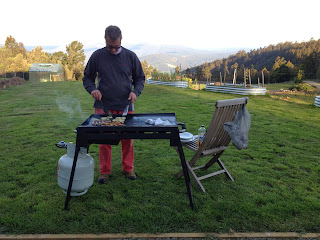 Posted by Susan Moore at 8:45 AM No comments:

Last Monday afternoon the heavy machinery arrived. Then early on Tuesday morning a bloke arrived to demolish a small strip of bush near our garage. The attachment on the bulldozer shreds the trees and turns them into sticks and mulch spread across the area. So it's a slightly ugly scar on our land right now... but it means the trees are now further away from the buildings. And the chooks and other birds have been enjoying it...

Everyone living here needs to have a fire plan. We all need to know how to prepare our property as best we can in case of bush fire and know in advance what we will do. Our current plan is to go early. Twice last summer we got ready to go as fires approached. We grabbed our box of documents like passports, birth and marriage certificates and insurance papers, got the cat carrier and dogs ready to put in the car. Once we had plenty of time so we packed a small bag of clothes each. Lucky for us, the fires didn't get close in the end. Others in our town were not so lucky.

For anyone in and near Franklin: please come along to the fire awareness evening to be held at the Fire Station in Franklin on Monday 9 December at 6.30pm. 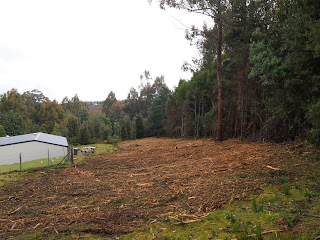 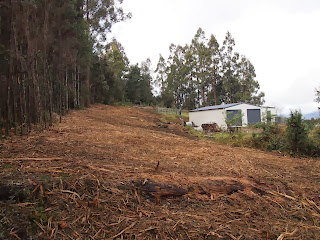 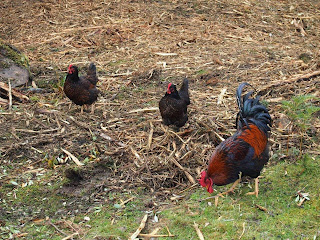 Posted by Susan Moore at 9:02 AM No comments: 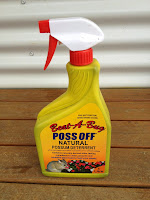 In just one night, possums have largely destroyed a lovely young oak tree near our garage - branches snapped, leaves all gone, only a few stalks remain. We had noticed a few possum droppings on the nearby fence, so we knew they were about, but it's the first time they've had a go at that tree. Must have been the tasty young leaves... I really hope it regrows. We've removed the fence around it that wasn't keeping anything out anyway, and I'm trying this product called 'poss off' which apparently they won't like the smell or taste of. We'll see. Not sure what's in it other than garlic, which is the clear aroma it gives off.

Down in our little orchard, it appears they've also been eating the leaves off our young espaliered apple trees... but have left the two pears alone! Weird. At least I know my veggies are safe. People told us when we moved here about the devastation possums caused in their vegetable gardens and the lengths they had to go to to keep them out, so David cleverly built a fully enclosed yard for my apple crate raised beds to go in. And the rest of my edible plants are in the greenhouse or on the balcony... except the garlic, which I'm hoping they don't like. 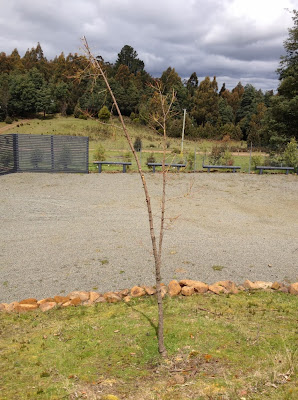 This spring, many varieties of birds have been active around our house. The scarlet robin and his girlfriend have been flitting at the windows pecking insects. The welcome swallows are swooping and nesting. The fairy wrens are seen as a a flash of blue in the lawn (and in the dog bowls). There's an owl we can hear in the early morning and evening. The fan-tailed cuckoo (who we call 'turbo bird' as his plaintive trilling call sounds a little like a turbo engine whistle) sits on the fence calling for a mate. We've had several 'raven invasions'. And a wedge tailed eagle took the last chook that went missing... we didn't see it happen but our neighbour did as he drove past! 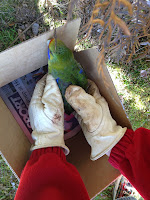 Yesterday morning David opened the blinds to find a green rosella sitting in the sun in the middle of our upstairs balcony. We think it had flown into the bedroom window and was concussed. We checked its wings, legs and eyes for injury but none was apparent. So we followed the wildlife rescue principles of 'warm, dark, quiet' and kept the bird in a box sitting on a hot water bottle in the bathroom for a few hours until he seemed feisty again, and let him go in the forest next to the house. Pretty fellow! 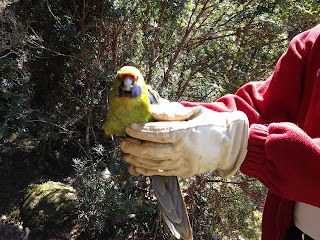 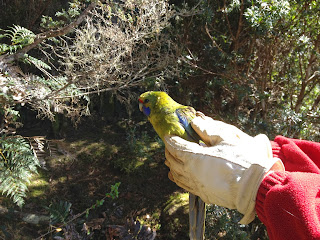