We are lucky to have neighbours who've become dear friends. We share a lot of laughs and food and good times. We have plenty of excess eggs to share and my neighbour is a whiz at preserving and bottling. Yesterday morning, this load of 'experimental jams' arrived. I can't wait to try the sloe gin strawberry and the frangelico peach! 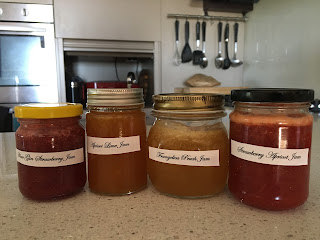 And yet, because of where we live, these 'neighbours' are at least five minutes walk away, so we have our own space and don't get in each other's hair. Unlike when we lived in Sydney and had five neighbours on our immediate boundary... we heard every argument and smelled every meal and cigarette. I don' miss that one bit.
Posted by Susan Moore at 6:39 PM No comments:

Compared to the past few years, we have eaten little from the garden. What with rabbits eating many of the seedlings (no peas, snow peas, arugula, silverbeet, beans or broad beans), work travel at planting time in spring and me leaving the greenhouse shut one hot day, killing everything in it except the oregano and sage... it hasn't been the most successful gardening year. Still, there have been some delicious things to eat. I've dug up half a bed of beautiful baby pink eye potatoes, some lovely carrots, a few cherries and the two little blueberry bushes are so laden with fruit I've had to prop up the branches with stakes. I put half a kilo in the freezer yesterday! One the way are apples, pears and (hopefully) some tomatoes. I killed the two tomato plants in the greenhouse that were already fruiting, and the four plants outside are only just starting to fruit. Green plums can also be seen on one of the two trees planted a few years back. Fingers crossed! 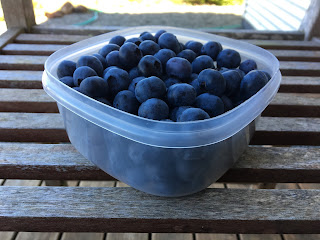 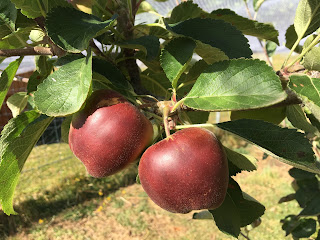 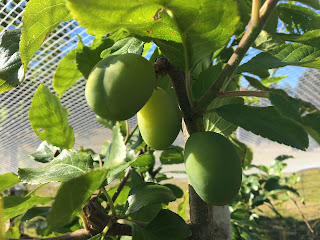 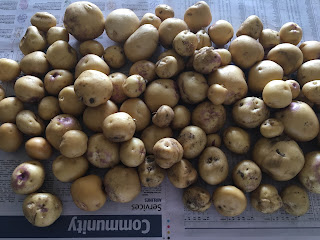 Legendary funnyman in the valley

In two weeks, Australian comedy legend Rod Quantock OAM is the headline act at Funnies@Frank's, the regular comedy room run by resident valley funnyman a.k.a. my husband David here in Franklin. Among many other achievements in a comedy career stretching back to 1968, Rod co-conceived and starred in ‘Australia, You’re Standing In It’, ABC TV’s first Melbourne comedy production and the door-opener for all that followed.You really must grab your tickets quick for this one... especially if you love a bit of political humour. Thursday 1 February at Frank's Cider Bar & Cafe, see here for details. 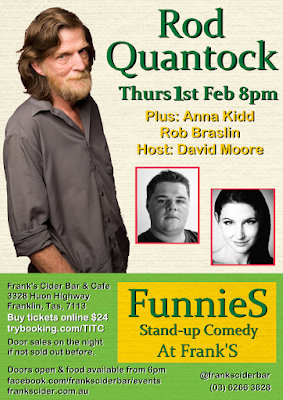 Posted by Susan Moore at 2:08 PM No comments:

The Cygnet yarn bombers have excelled themselves. Everything from garbage bins to trees was decked out in colourful wool at the 2018 Cygnet Folk Festival over the weekend and looked fabulous. Check out this beautiful chair: 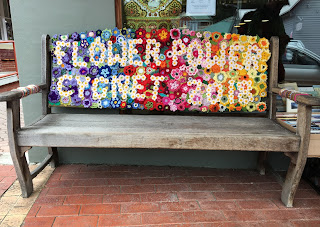 This year we bought a day pass just for the Sunday of the festival and spent a long and full day there. We started off with a yoga class in the Cygnet Town Hall. That's where the wholesome stuff stopped. Let's just say my diet for the wasn't healthy, but it was delicious! Coffee with an Eccles cake and a spinach ricotta pastry from The Lotus Eaters for breakfast, a sourdough doughnut from Yeastie Beastie, an organic choc mint ice-cream, a Taiwanese steamed pork bun (from Geeveston), Willie Smith's cider, a currywurst sausage from Silver Hill... oh boy. I'm back on the wagon today. Still have a couple of Christmas kilos to lose. 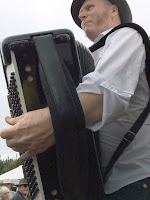 As usual, the variety of acts at the festival was terrific. We enjoyed indigenous songwriting legend Joe Geia and his band (our choir in Franklin sings one of his most famous songs, called Yil Lull), The Band Who Knew Too Much from Melbourne (singer and accordion player Dave Evans right) and Canadian balladeer Scott Cook and the Second Chances. In St Mark's church, we heard the distinctive sounds of a collaboration between ARIA award winning traditional Greek band the haBiBis and Jewish Sephardic music from the Balkans by Saray Illuminado and later, the harmonies of Queensland duo, Noel Gardner and Alex Bridge. We dropped in on a Scottish tea dance in the town hall accompanied by harp players Van Diemen's Angels and wrapped up the day with Hobart's Bootleg Gin Sluggers in the scout hall in Burton's reserve. All in all a top day out. The organisers and volunteers really did a terrific job. 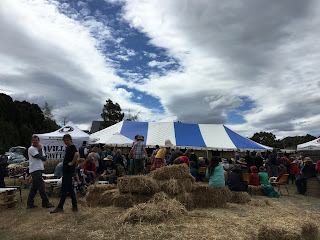 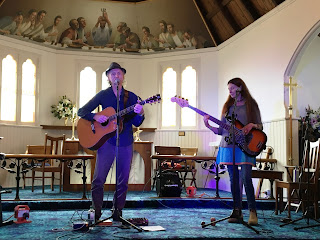 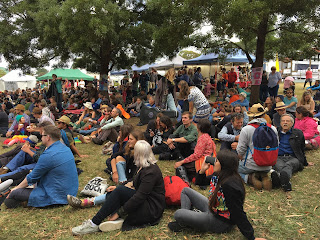 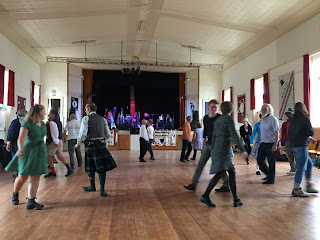 Posted by Susan Moore at 7:24 PM No comments: 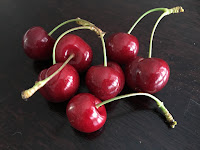 Yesterday I gobbled up the first handful of delicious, freshly picked cherries from one of our two small trees planted a few years back. We've had a couple appear on them before, but either they didn't ripen or were eaten by someone else before they did. This year, there are several more small bunches almost ready to eat, nicely protected by the netting installed over the orchard for chook protection. Plus loads of blueberries on just two small bushes, some plums and one lousy apricot. Next to ripen will be several varieties of apples and pears. Despite general neglect, it's fantastic to be getting tasty fruit from our own little trees. 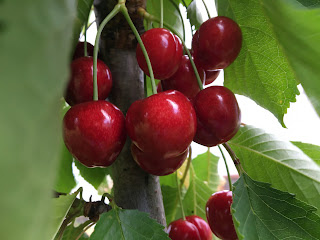 The legend of "the Turkish" 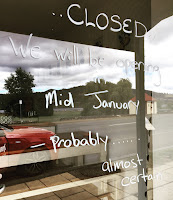 Ever since we moved to Franklin almost eight years ago, people who have lived here longer than us have told us about "the Turkish". In almost reverent tones. I don't know what the restaurant was called, but people have mentioned great steaks, delicious Turkish food, lovely bread, Friday night dinners, BYO bottles of red, tables full, good prices, had to book, casual meals... anyway, it had closed by the time we arrived. The building was leased, sold, re-opened very briefly as a cafe, repainted (maybe twice), closed again. There have been rumours, renovations, windows covered up, new kitchen equipment delivered, more rumours... frankly I have no idea what of the above is true and what isn't and we'd long since given up on it ever being reopened as an eatery. And now this! The window coverings have been removed, there are new tables and benches inside, and a  cryptic message on the window. So we are placing bets on a possible opening in March... or maybe 2019... something. Sometime. 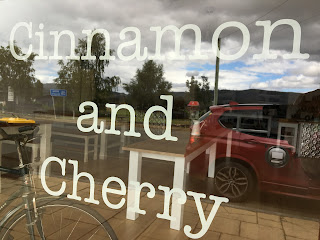 Not keen on crowds, we opted for a very low key, hassle-free new year's eve. We started with early evening drinks and snacks with our visitors from NSW and assorted Franklin folk at the Landcare walk on the banks of the Huon. The wind mostly held off so we could enjoy a chat, a champagne and a laugh with this beautiful backdrop. Then home for a curry, a beer and fireworks on the telly. Happy new year to you and yours! May 2018 be fabulous. 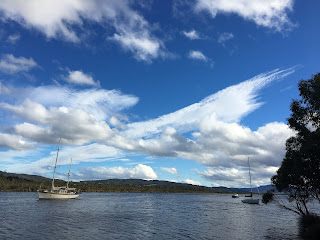 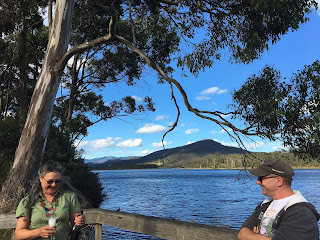 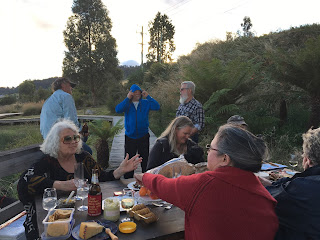 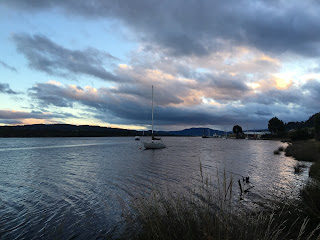 Posted by Susan Moore at 4:22 PM No comments: