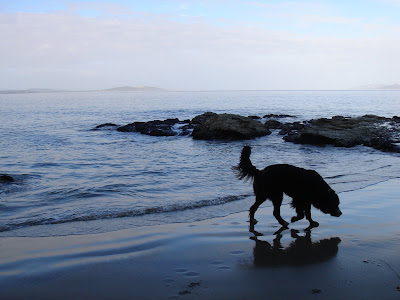 In Sydney we used to take Baerli to the doggy beach at Bayview (Rowland Reserve). It's a great place. Loads of dogs, plenty of sand and generally clean, flat water for them to swim in. Yesterday we found an even better one not far from home, at Kingston Beach. It's an ocean beach with lovely clean white sand and lots of dogs having a great time. We saw one other Bernese Mountain Dog there but apparently there are a few that go there most Sundays. I think we'll be going there a lot. 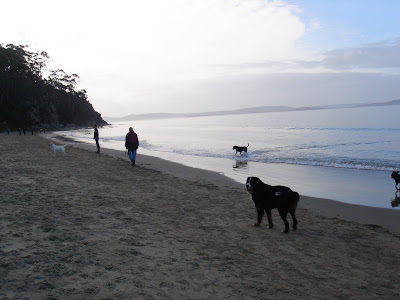 Posted by Susan Moore at 9:48 AM No comments: 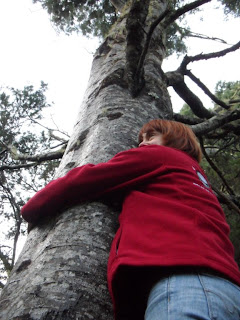 This photo was taken for my friend Ingrid, a tree-hugger from way back. The tree I am hugging is an old Silver Wattle with a trunk covered in lichen. It's one of the many trees we have growing on our land. The Silver Wattle has tiny blue-green leaves and is one of the shorter under-story trees in the local native rainforest. In late winter or early spring I expect great clouds of yellow fluffy flowers to appear... along with severe hayfever!
Posted by Susan Moore at 7:23 PM No comments:

Our dog Baerli likes to sit on the edge of the hill and stare at a white goat that lives across the road. The goat stares back and sometimes wags its tail furiously. I didn't know they did that. There's another pretty brown goat chained up there too but it is shy and not at all interested in the dog. They both seem to be doing a good job of keeping the grass down over there. Might have to get ourselves one of those. Although David is off to look at a ride-on mower this afternoon, much faster and more efficient than a goat. 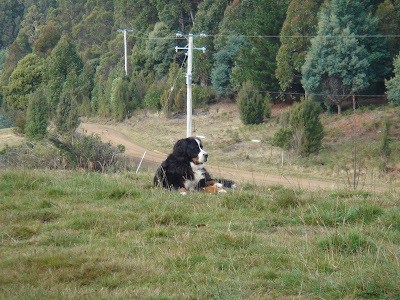 Posted by Susan Moore at 9:04 AM No comments:

Two of the main questions I have had about my move to Tasmania have been "what's your internet connection like" and "what's mobile coverage like." More on the first issue later, but the second one is extremely important, as we have no landline phone at home. There is a Telstra phone cable at the roadside on our property, but apparently it would cost several thousands to get a trench dug to bring the cable up to the house and wire up the house. That's why many people here use wireless and mobile. 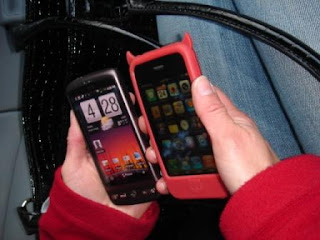 For the past week or so I have looked like a major gadget geek, often seen with an iPhone 3GS on Vodafone's 3G network in one hand and an HTC Desire on Telstra's Next G (provided free of charge by Telstra under their social review program) in the other. Simultaneously pressing on the screens with my thumbs. I've been trying to determine which mobile network is better for my needs.

My expectation was that Next G would be better, just based on reports from others, as well as Telstra's legacy obligations to service regional Australia and how they market the Next G service. Here's what I've found:
This leaves me with a decision to make. I can still work from home just as well on the Vodafone 3G network as I can on Telstra's Next G. But if someone calls when I'm down the road at the post office, they can't reach me. Outside of work, there will be a lot of places I can't make or receive calls (those important ones like 'can you bring home some milk?'). And that is frustrating not just for me but for those trying to contact me. And then there's the social media addiction to consider, navigation and so on. Next G wins.

Which is kind of sad because I've been a happy Vodafone customer for many years, mainly due to receiving good customer service. And a concern because my OH's experience last year of switching to Next G and then trying to cancel the service was unbelievably bad. But I guess I'm one of the lucky ones, because as part of the social review program for the HTC Desire I have been very well looked after by Telstra folk.

Not being a techie person I haven't used any special testing tools to come to my conclusions, and I have no idea exactly how much I can attribute to the handset and how much to the mobile network. This has simply been my hands on experience.
Posted by Susan Moore at 2:35 PM No comments:

In small towns, there is little need to get creative when naming streets when there are so few of them. For example, we live in New Road, which must have been new way back when. Below is... Old Road. And the main road is called... yes, Main Road. Our question is... was Old Road once New Road, before New Road was built? 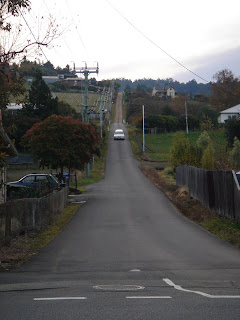 Posted by Susan Moore at 9:00 AM No comments: 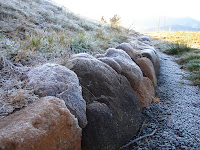 Yesterday we had our first frost. The sun quickly melted most of it, but white patches remained in the shade for much of the day. The dog's swimming pool / bath was frozen over and even at 4pm still had a huge frozen sheet that shattered like glass when I threw it on the ground. This morning the rocks outside looked pretty much the same as this. 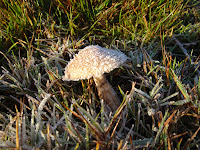 We have quite a lot of mushrooms growing in the paddock thanks to the heavy dews. This one has little icicles on it from the frost.
Posted by Susan Moore at 12:34 PM No comments:

A change in the weather

The weather here passes through in waves, generally coming from the south-west behind us. Rain, then sun, then cloud, sun, more rain. This pattern resulted in a lovely rainbow this afternoon.

The benefit is that you can see the weather coming, so have a fair idea of what to expect in the next 30 minutes. It comes in handy when you are trying to judge whether it's worth going out for a dog walk.
Posted by Susan Moore at 9:35 PM No comments:

In case you'd like to see where I'm now working, here is an early pic. Still have some organising and filing to do, and a few things I need to buy (like a waste paper basket) but I love it already. Certainly can't complain about the view. Also it is very quiet and easy to concentrate. And I'm surrounded by all my gadgets and stationery items. There is a reason David won't allow me to go into an Officeworks store unsupervised... luckily there isn't a stationery shop in Franklin.

This morning Baerli decided to take over the beanbag in my office... that is, when she's not romping around the paddock or staring at the white goat across the road.
Posted by Susan Moore at 12:28 PM 2 comments:

Which plant is that? 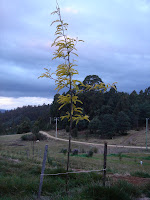 The previous owners planted lots of trees around the property and kindly left the tags from them behind in the garage. I did the same in the house we just left. Trouble is, I still can't work out what most of them are. There are three silver birch trees planted in front of the house (like this one) and I've identified a few of the others, the rest I guess I'll work out when they get bigger.
Posted by Susan Moore at 7:57 AM 1 comment:

As if this week hasn't been exciting enough, on Friday I found out that I had been selected to receive a free sexy new HTC Desire phone from Telstra as part of a 'social reviewer' program they are running. I collected it from the local post office at lunchtime today. The posties don't come this far up the hill, so we now have a daily trip to our PO box and a lovely friendly postmistress at the cute little post office in Franklin instead. 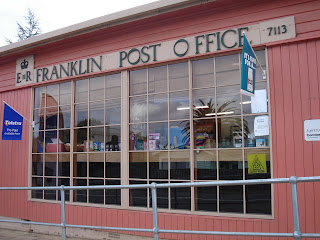 But back to mobile phones... I've been a happy long-term Vodafone customer, and up here at home on the hill I actually have great reception on their network. Trouble is, when I drive down the road I get no service at all mostly. So I'd been thinking about (reluctantly) moving over to Telstra's Next G mobile network anyway, when I got a call from Telstra saying I can try it out for free for a couple of weeks! Perfect timing.
Posted by Susan Moore at 2:02 PM No comments:

Late afternoon/early evening dog walks have taken on a different look for us. Instead of hiking up suburban streets to see our mates and their dogs at the local off-leash doggie park in Narraweena, we have this. 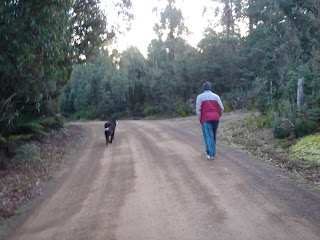 Today's other excitement was collecting David's motorbike. But first she had to be freed from her very well-built crate inside the Grace Removals warehouse on the dock in Hobart. 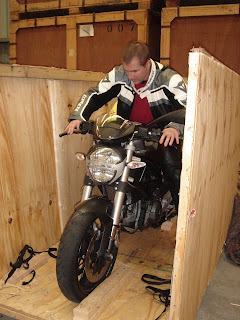 Posted by Susan Moore at 8:27 PM No comments:

Now that we live around 4km up a dirt road, this will be the permanent state of the wheels on our car - well coated in a light clay mud. 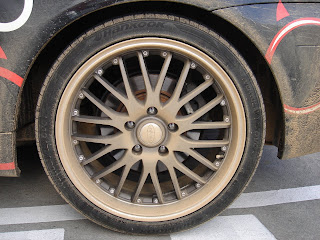 Above the fog line

Someone told us before we bought this place that at around 450m above sea level, we would be above the fog line in winter but below the snow line. So far this holds true. Yesterday morning we could see small patches of snow on the hills on the opposite side of the Huon. This morning it was brilliant sunshine up at our place and a blanket of fog down in the valley.

I don't think I'll ever get sick of the view from this place. It changes constantly. 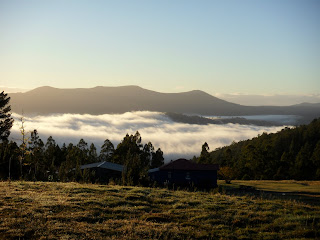 Three days ago, David and I moved to the Huon Valley, about 40 minutes drive south of Hobart in Tasmania, the often forgotten southernmost state of Australia. On this blog I plan to share a little of this beautiful region with friends, family and anyone else passing by, largely through a photo or two each day.

The drive south (approximately 1,700 km including the ferry) was a big adventure in itself, so my first post is just a few highlights from the journey. 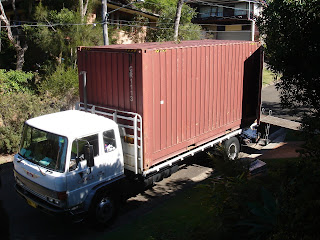 Can you believe we almost filled this container with our stuff? Including David's motorbike, it was full. 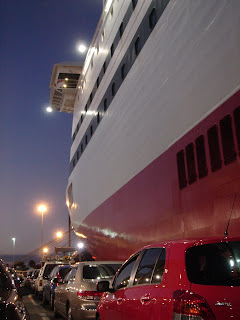 Waiting to board the Spirit of Tasmania at Port Melbourne. 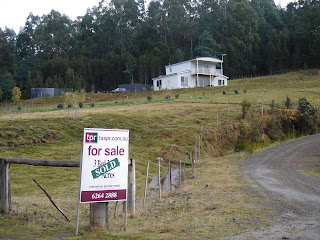 Finally we made it. Good to actually see the place, given we'd only been there once before, and that was 8 weeks ago. 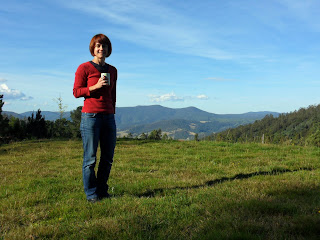 Had time to unpack the cars and have a cup of tea before driving back to Hobart airport to collect our poor bewildered dog and cats. Think I look a bit like Maria doing "Hills are Alive" from The Sound of Music in this pic.
Posted by Susan Moore at 8:55 PM No comments: