Safety in the bush

On Sunday I spent all day at Waterworks Reserve for the Hobart Walking Club's 'essential skills' training. Every prospective member has to complete this training in bush survival skills and navigation within the first twelve months before they can become a full member of the club. It is led by experienced bushwalkers and long-term club members. Pleased to say that I now know how to use the compass I have owned for the last few months! Now I just have to keep the practice up. 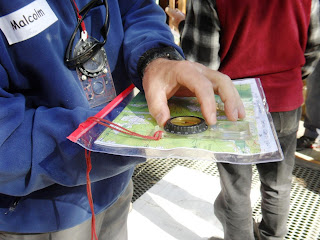 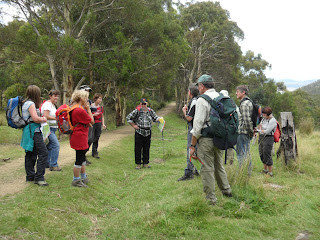 Posted by Susan Moore at 8:47 PM No comments: 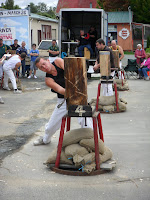 We have just had a weekend packed with activity, thanks to the hardworking organisers of the annual Focus on Franklin celebration. This year, our little town celebrates 175 years since settlement. The weekend kicked off with the Tierney Law Maritime Ball on Friday night, attended by plenty of sailors, captains, commodores, pirates, some Titanic survivors, Gilligan, a ghost ship, a black swan and even a 'catch of the day'. Music from 'Rumour' and the Hobart City Swing Band had everyone dancing.

Saturday morning we headed back into Franklin. We inspected the apple teacakes, crumbles, pies and ciders on display in the Apple Delights cooking competition and chatted with some of the cooks, but the smell of baked goods became too much. A history display in the Palais revealed some interesting old photographs of the area. Outside the Lady Franklin Tavern, the wood chopping contest was underway and we watched a couple of heats. 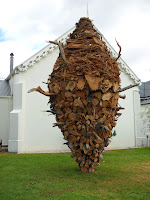 Down the road, artist Marcus Tatton had installed a sculpture in front of the Church Studio, which will remain there for a month for us all to enjoy. Inside, an exhibition by local jewelery artists Jill Bruce and Sandi Trajdos showed many lovely pieces. I loved the woven sterling silver and the silver leaves on some of the neck pieces. By then we were in need of coffee, so we headed to Petty Sessions for a takeaway. The walk to the other end of town was worth it, not just for the good coffee - an exhibition of coloured pencil drawings of Tasmanian wilderness by prize winning artist Lisa Falk lined the restaurant walls. It is hard to believe they are drawings, the colour and depth makes them look almost like a photograph. 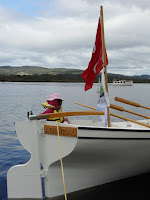 The 'on the water' program was in full swing, and down on the jetty we secured tickets on The Admiral, Australia's second-oldest working boat, to take a tour through the Egg Island canal and back around the top of the island. Built in 1865 and restored in 2009, she is made of Huon Pine. It was a real treat being on such a beautiful old boat with some of the volunteers who restored her - even if we passengers had to take it in turns to row! With the heavy oars, our wrists and forearms soon proved not up the task and we retired to the passenger seats in mild pain. A few photos of the trip are included below.

We finally sampled some Tempura Mushrooms, popular fare at all of the festivals we've been to in Tasmania. So popular, in fact, that the queue has put me off trying them earlier. Then followed some Franklin Woodfired Pizza and a Huon Valley Soft Serve ice cream, while catching up with friends. In the afternoon we brought the dogs down to the oval where they were patted by many and (excuse the pun) lapped it up. We saw an art exhibition at the masonic lodge, and a screening of Now and Then, a DVD of old photographs of Franklin blended with new ones taken by local musician and photographer Mike Peters, set to the haunting music of Mike's band Rumour. The song is still in my mind. Then we sampled some local pinot from Heriots Point and watched other more energetic folk Zumba away to the music. As it got dark, a parade of boats strung with coloured lights appeared on the river. The multi-talented young man who made our coffee earlier in the day was spotted performing with fire sticks. Then it was time to help pack everything away.

On Sunday night pacific reggae act O-Shen played at the Palais in Franklin as part of the Ten Days on The Island program, a biennial visual and performing arts festival in Tasmania. Locals young and old got on their feet to dance. What a great finish to the weekend. We couldn't be happier that we've chosen this wonderful place to live.

Posted by Susan Moore at 8:57 PM No comments: 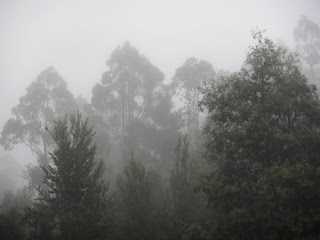 When we moved here, we decided to name our place Geisterwald - spirit or ghost forest in German. This morning, it really looked like that as the fog moved in. At the Taste of the Huon festival a couple of weeks ago, we ordered a carved wooden Geisterwald sign for the front fence, which should be ready for collection soon.

I have mentioned once before on this blog my surprise that here in Tasmania you are pretty much allowed to burn stuff anytime. Except during fire permit season when you need a permit, of course. Well, once the fire permit season was officially over, people went mad, burning piles of wood and anything else lying around. 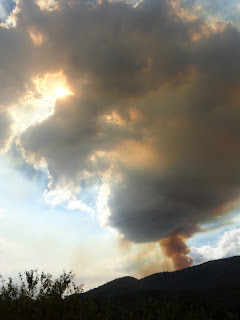 It was fairly bad on Saturday with a huge burn off out the back of Huonville causing a smoky haze across much of the local area. But Sunday was something else. There was a huge fire (unsure whether on forestry or private land) somewhere around Lonnavale. From where I was at Judbury, the thick plumes of black smoke turned the sun bright red and then obscured it entirely. So what was actually a gorgeous sunny day in the Huon Valley looked dull and overcast. And it smelled pretty bad too. It must be awful for asthma sufferers. Maybe it was a bushfire hazard reduction backburn? Hmmm.

It strikes me as environmentally backwards that this is still allowed. As a minimum, it would be great to have fire-free Sundays so we can all enjoy at least some of our weekend out in the beautiful clean Tasmanian air. Is it all really necessary?
Posted by Susan Moore at 10:03 PM 1 comment: 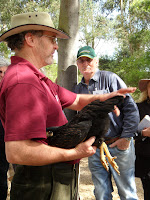 Now having been the proud owner of four pullets for all of six weeks, and far from confident as a chook owner, I was happy to be able to get to a poultry keeping workshop today run by Paul Healy, the well-known breeder of Barnevelder poultry who I bought my birds from. It was held at Huon Falls, his property at Judbury. Paul is best known for his talkback on ABC radio on Saturday mornings which is amazingly popular and the columns he writes for Organic Gardener and the magazine insert in The Mercury. After more than 40 years breeding poultry, you could say he knows his stuff... but he says he's constantly learning as people's situations, the climate, illnesses and pests never remain constant. So if you go to a workshop, take pen and paper and don't expect notes or a handbook, as the advice will almost certainly change. I learned a lot, from the best way to catch and hold them, what to feed, how to worm them, how to house them safely, best types of runs and nest boxes, common mistakes, how to prevent and treat mites and lice, what to grow that they like to eat, and finally how to kill and skin a rooster, one of those non-fun but necessary parts of owning chickens... except for the eating bit of course. And I must say - it is hard to beat a box full of Barnevelder chicks for cute value!

At lunch we were able to wander down to the banks of the Huon River where it is considerably narrower and more turbulent than here downriver at Franklin. It was a great day for me where my head was cleared of work for the first time in ages. It was just a shame that the valley was filled with smoke from burning off nearby... more on that in another post. 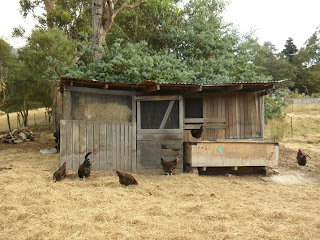 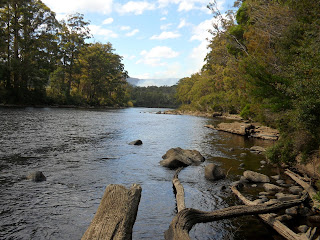 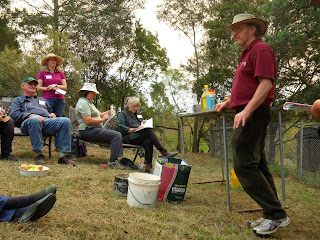 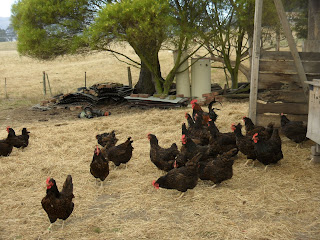 A Taste of The Huon

A huge crowd turned up at Ranelagh Showground today for day one of A Taste of the Huon. The organisers looked happy. They couldn't have asked for much better weather. Although after a day eating and drinking out in the hot Tasmanian sun (no I am not joking  - you need serious sunscreen and a hat here) I think a few punters will be a bit red and sore tonight.

We tried the new salmon sausages from Silver Hill Fisch, apparently set up by the daughter of the people that do the best German sausages around, Silver Hill Bratwurst. They were fantastic. A lovely glass (well, plastic cup) of Inn Cider. Then some salt and pepper calamari washed down with a glass of sauvignon blanc from Two Bud Spur. Finished up with an ice cream made from local organic produce. Yum, yum and yum. Caught up with a few friends and saw familiar faces from Cygneture chocolates, Chakaya Alpacas and more. This was a great day out and we enjoyed it so much more than the Taste Festival earlier this year. 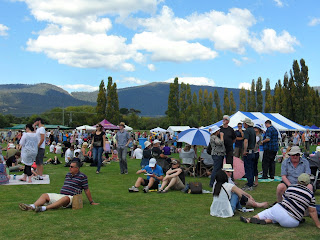 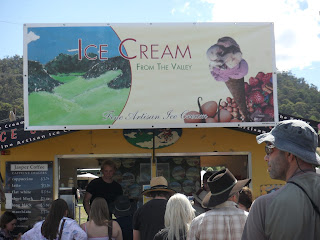 Posted by Susan Moore at 8:18 PM No comments:

Finally in the local rag

Every man and his dog has been in our local newspaper, the Huon Valley News. I use the term newspaper loosely. Actual news is noticeably absent, and that's a good thing given the depressing stuff we're subjected to on TV, radio and the internet each day. For example, this week's edition of the paper features a photo of some kid in his school uniform, sent in by his mum. He's in the first grade at the local primary school. Is it his first day at school? Has he won an award? No. He just attends the local primary school. David's been in the paper three times already in the 10 months we've lived here. Well this week it was my turn... albeit appearing 'anonymously', and despite the fact that David sent in both the article and the photo to make it happen! 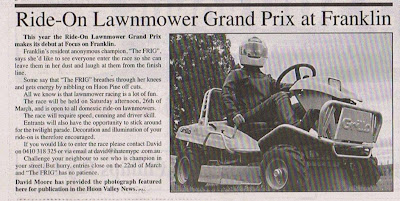 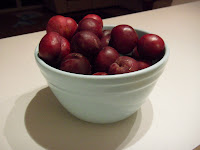 We are continuing our feast on stone fruit thanks to Franklin friends Lorrie and Warren who kindly gave us this pile of delicious plums straight off the tree in their small orchard. They are very sweet - the friends AND the plums.
Posted by Susan Moore at 9:03 PM No comments:

Yesterday was summer in Tasmania, following winter last week. We went on a walk with 15 or so people from the Clarence walking group that we've recently joined, up Mt Forestier which is just outside Dunalley on the Tasman Highway, heading towards Port Arthur. At least, that's where we were heading last time we drove that way. It was great to be outdoors in the sun and fresh air, especially as I was still trying to shake a nasty cold. The views were beautiful, but seriously, this can hardly rate as a 'mountain' at only 319m. We live higher up a hill than that, at 450m.That said, we did climb Mt Forestier from sea level, so it was certainly good exercise.

Posted by Susan Moore at 8:46 PM No comments:

We popped into Home Hill vineyard in Ranelagh last weekend, actually just hoping to pick up a gift at their shop, and the vines were dripping with tiny grapes ripening, getting ready for vintage time. A lovely sight! 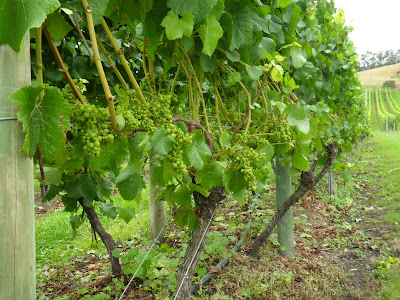 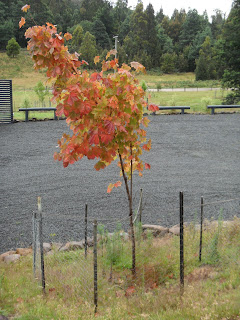 It's officially autumn now (and 7 degrees outside this morning) but this young tree started early. Its leaves have been turning since late January.

I'm quite looking forward to seeing the colourful display of trees in the valley. We arrived here at the end of Autumn last year and it was mostly over.
Posted by Susan Moore at 8:59 AM 1 comment: