One thing we were keen to see when we moved to Tasmania was aurora australis, or the 'southern lights'. I had read about Hobart locals alerting each other by SMS when one was occurring, and that sometimes vehicles could be seen snaking their way up Mount Wellington in the early hours of the morning for a better view of it. This year we got lucky, with two sightings over summer/autumn, one while my parents were visiting. David has subscribed to various alerts which show the size and location of the geomagnetic field over the south pole, a good indicator of the likelihood of seeing an aurora. Of course, the nights that had the best potential were cloudy. Southern Tasmania is generally a good spot to see them because there isn't much light pollution from urban centres, but you still need a clear, moonless dark night for a good view. Neither of our sightings so far were spectacular, but still amazing to see, with columns of green light moving in the sky. Our camera at the time was not up to taking a decent photo, so here's one that appeared in The Mercury, taken from Hobart.

After being away for work again last week, this weekend was another one filled with jobs that needed to be done around the house and garden. This morning we popped in on the last Huon Valley Growers and Makers Market for the next few months (they start up again in spring) and stocked up on local honey and jams, then took the dogs for a walk along the river at Franklin. They take every opportunity to get in the water or roll in something horrid. The pair of them were wet and disgusting by the time we put them in the back of the truck to go home, though you wouldn't know it from the photo below. They smell really bad. Next weekend they are getting the full beauty treatment: we have booked a home visit from a mobile dog wash and grooming service. Normally we wash them ourselves, but in winter they take so long to dry and the days are very short, so it's a special treat. For us, not them.

I feel like there's little to report from our weekend, but it has been so busy. Yesterday we positioned and filled three new raised garden beds. I made a start on digging out the beds in the new greenhouse. Transplanted a few seedlings. We saw the film 'The Artist' at our lovely local art deco cinema right here in Franklin. Took the dogs to Kingston Beach this morning and picked up a few items on the way there and back. Dusted, vacuumed, composted, washed, scrubbed. Cooked a nice massaman beef curry for dinner. Called some friends in Zurich. And now for some folding, ironing and packing for a work trip to Sydney tomorrow. Phew, so tired now I need another weekend. 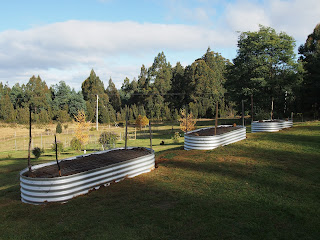 New girls on the block 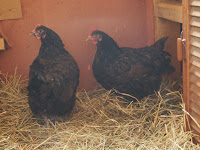 Meet one-year-old chooks Chicken Patty and Chicken Parma, who recently joined our tiny flock. It's a blurry photo taken inside the shed, but they've hardly been out of the shed since their arrival so it's hard to nab a nice outdoor shot.

Introducing new birds to a flock is actually quite a risky gamble (see here if you want to know why - in great detail), but seeing as I didn't buy enough pullets first up (tip for beginners) I can't see another way around it than to introduce at least two more grown birds at a time. We did try to hatch some fertile eggs under a broody hen who lost interest after a week, then in an incubator without success, and none of the girls are laying at the moment. Our hen-to-rooster ratio is still way too low, but better than it was last week.

So how did the introduction go? After bringing the new girls home, they lived in the broody nesting box inside the chook shed for a few days. That way, they were kept separate from the existing flock but they could see each other. Then last Thursday night after dark we lifted them out and popped them on a perch to sleep for the night. When I went down to the chook shed early the next morning, there was lots of cooing and eyeing each other off suspiciously, but no pecking. Everyone was eating and drinking. A couple of hours later I let them out to range. Boss-hen Chicken Teriyaki (who was first to moult recently but has now re-grown her beautiful dark feathers) started chasing the new girls until they hid under some bushes. But still, not too much violence. Came back a few hours later and all of them were sensibly back inside the shed, as it was windy and raining. The new girls have hardly been out of the shed, but when they are all inside, there is relative peace in chookland. At nightfall, Russell the Rooster unceremoniously dumps his old harem to cuddle up to the two new girls on their chosen perch.

P.S. While I'm on the topic of poultry, I was so happy to read today that the Tasmanian government has decided to ban hens in battery cages and start phasing out pigs kept in sow stalls.

Posted by Susan Moore at 4:01 PM No comments: 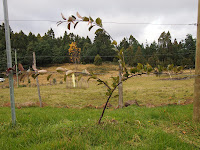 The six apples and two pears collected from Woodbridge Fruit Trees one snowy weekend last July have survived their first season, despite a few cherry slugs on the pears. The little tree pictured here tied safely to its trellis is a Huonville Crab, which has beautiful purple leaves. Apparently its fruit will have scarlet coloured flesh as well. The trees produced three actual apples (two Cox's Orange Pippin and one Berner Rose), then not long before they were ready to pick, one of the dogs broke into the orchard (she was after the chook poo in there) and ate all three! So we missed out, and David made a special latch for the gate to prevent further incursions. If you want to place an order for some trees from Woodbridge, I suggest you get in quick as some varieties are already sold out. Each year, many people wait for notification that their new catalogue is up in late April/early May, so they can place their order and won't miss out.
Posted by Susan Moore at 3:00 PM 1 comment:

In Autumn, quite a few of these lovely scarlet robins showed up at our place again. They comb the grass and my veggie beds for bugs and even fly up to peck our windows. They perch on any available stick or post and are so pretty to watch. David took these photos of them today with our new camera, which we're having fun playing around with at the moment. It was two degrees and snowing at the time - see the white streaks in the photo of the female (top) and ice on the table behind the male bird (bottom). 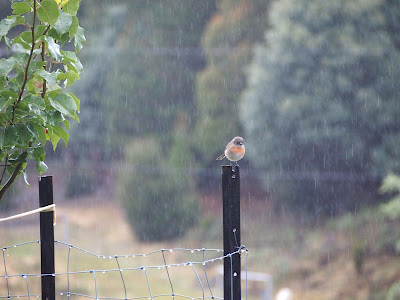 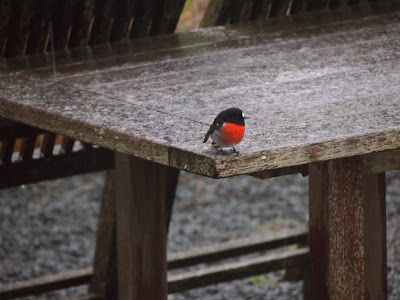 The instructions said it takes five hours to construct. Hmm. Triple that. Even with my clever handyman husband in charge. If you are not a DIY type do not attempt to build one of these kits. And check out the fun we've had in the clay. But it's up, it looks fantastic, it's very solid and quite warm and toasty inside. I am looking forward to the longer term results: tomatoes, chillies, basil... yum. 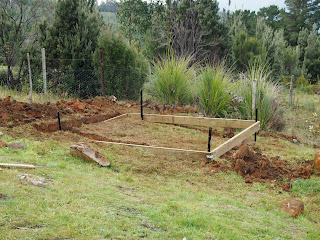 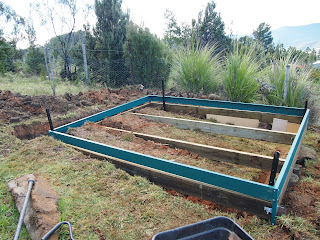 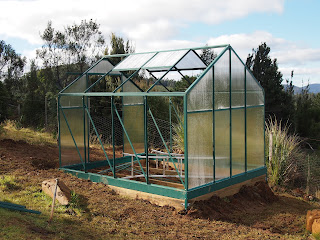 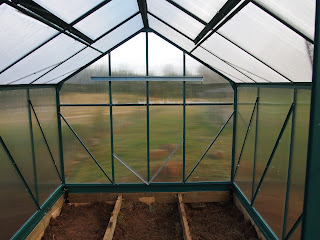 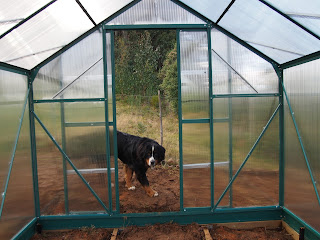 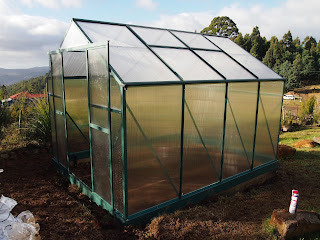 Today we are celebrating two years since arriving in Tasmania after the big move south. Boy has that flown. We feel so settled here and yet still like the new kids. We love our new chosen home and are so glad we made the move.

Some things I have lost:

Some things I have gained:
And much more besides. More than anything, we've gained a new optimism and excitement about the future that simply got lost in the day to day slog in Sydney. Here's to the next two years. There's so much more of Tasmania we haven't even seen yet. 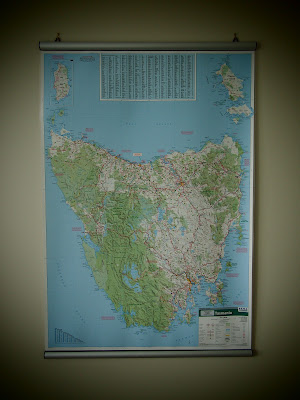 Last week we had solar panels installed. Not a day too soon it seems, with power prices set to rise again from July. The price of power in Tasmania has risen 23 percent over the past two years. It's not any better in other Australian states. I remember getting quite a shock opening our last bill in Sydney. 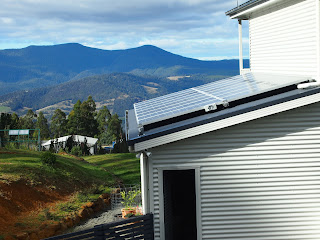 Even with rebates it's not cheap to install solar, but we think it will pay off in a reasonable period of time. We have neighbours who recently finished building their home and are totally off-grid with solar and wind power and a shipping container full of batteries. Very cool - or warm, as they choose! What's your power strategy? 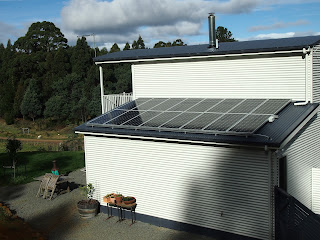 On Sunday I pulled out all the tomato plants. One or two had started to die off and frosts are forecast for this week. And I wanted to prepare the beds for some other crops. All up we had 12 tomato plants of a couple of different varieties, Berner Rose and Tommy Toe.

Last year, when we had a cool and reasonably wet summer, none of the seedlings started in the garage then under plastic outdoors grew to be viable plants. This year we had a gloriously warm and dry summer. I started the tomato seeds early in the spare bedroom which worked really well. I let the seedlings acclimatise outside for a while then transplanted them, and the plants grew healthy and strong. Loads of flowers turned into loads of small green tomatoes... but it was all too slow and autumn arrived. Despite the sunny days, the cooler temperatures left us with few ripening tomatoes. 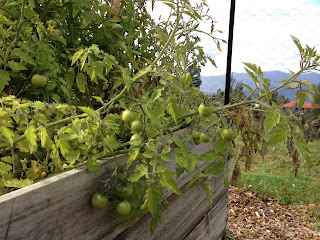 Finally a couple of weeks ago I started pulling the ones that had started to change colour off the plants and put them in a bowl inside the house near the window. Now we've had six ripe enough to eat (very tasty) and a few more in the bowl are almost there. 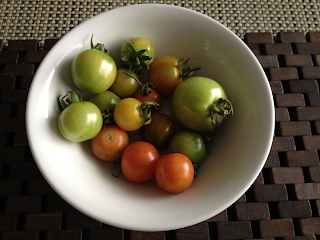 Next year I am sure we will do better again, with a soon-to-be-revealed new and improved strategy.
Posted by Susan Moore at 7:30 AM 9 comments: