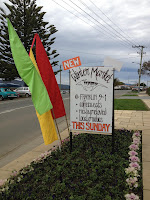 Another day, another market! The Winter Market in Franklin is proving popular, with good crowds and happy stallholders filling the Palais Theatre each month. There was a very wide range of food, arts and crafts and second hand wares on offer when we popped in yesterday. I didn't really need anything, but after more than a week away from home I felt like catching up with friends and finding out what's going on. I picked up the cute little wooden garden signs pictured here for just $4. Yes, yes, I do know what garlic looks like, so the signs really aren't functional, just pretty. Also bought a tub of yoghurt from Mountain River Yoghurt - more great local produce to enjoy. 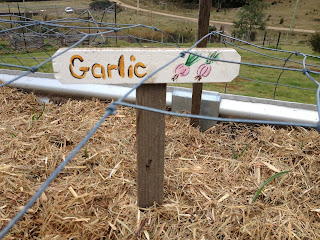 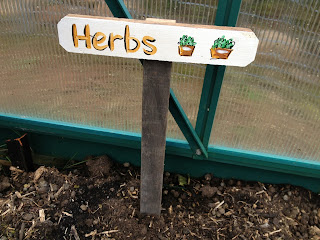 This morning I popped into the Harvest Market in the Cimitiere Street car park in Launceston and bought a Ritual coffee and brioche from Manubread for breakfast. Picked up some fresh vegetables, some bacon from Mount Gnomon Farm, some granola from Day Time Food and some Mount Direction Olive Oil. It was a cool and cloudy day but the atmosphere at the market was warm and welcoming. And it was nice to see a little piece of the Huon Valley on show at the Willie Smiths Cider stall. 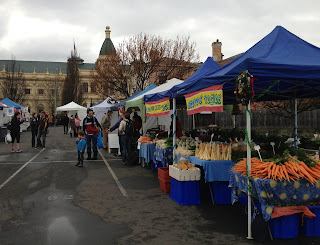 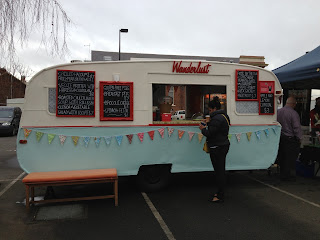 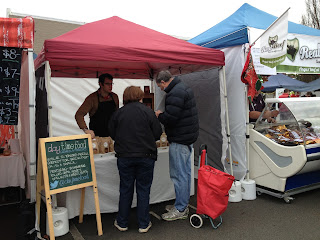 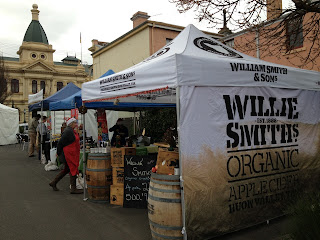 Posted by Susan Moore at 3:35 PM No comments: 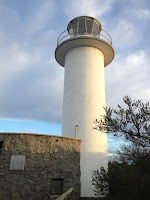 I'm in beautiful Freycinet National Park for a few days for the Tasmanian Leaders Program mid-year residential. I can't believe it's July and we're halfway through the program. It's been a great journey so far. And how lucky we are to be staying in a place like this.

On the first morning I got up at 6.00 to walk up to the Wineglass Bay lookout. Too early, it turns out, as it was still dark when I got to the viewing platform and had to wait for dawn so I could take the photo below to prove I was there! Afterwards I drove to Cape Tourville lighthouse and walked around the point while the sun rose.

Last time I was in Freycinet was with David on our 'driving round Tassie looking for somewhere to live tour', a couple of years before we moved here. I don't think I have ever seen David look quite as relaxed as in a photo I took of him sitting on the back deck of Freycinet Lodge, slight stubble, beer on the table, aqua blue water in the background. It's so peaceful here, I can't help but let go of stress and worries. 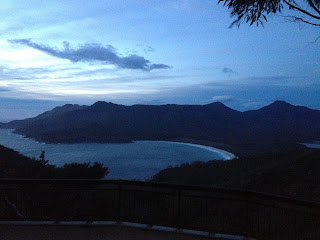 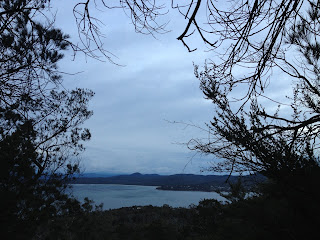 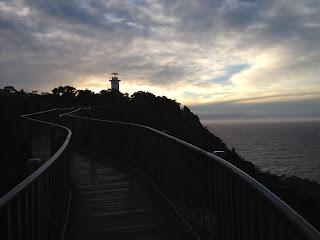 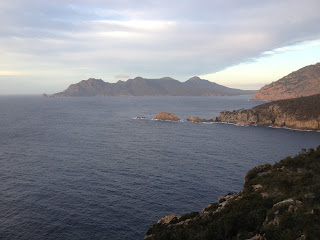 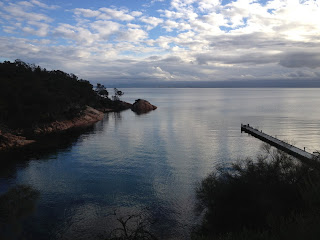 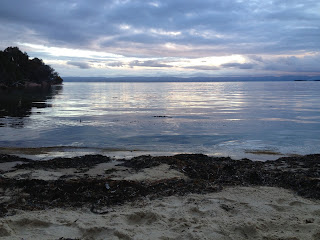 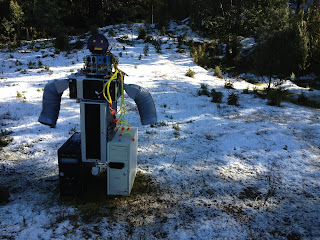 One thing my creative husband was looking forward to about our move to 'the country' was having a cool mailbox. You know, those creatures along the roadside in rural areas: the milk cans painted as cows, gas bottles painted as pigs, microwave ovens, bits of old stuff cobbled together. David's plan was to build a UFO complete with lights and aliens. Only problem is, we don't actually have a mail delivery service where we live. We collect our mail from a PO box at the village post office. So no mailbox required.

Last year, David constructed a 'robot' to attract attention at a trade show. Made out of old computer parts, he had a 'face' that flashed red LED smiley lights. If you opened his 'chest', he played happy birthday (the Stevie Wonder version) or the Star Wars theme, from old musical birthday cards.

After the robot's job was done, he took up residence at first in the garage, then at the end of our driveway. We've seen people slow down for a look. I think he looks quite friendly, but one of the locals who drives past on his way to chop wood up in the forestry told us that the robot freaks him out!
Posted by Susan Moore at 8:05 PM 1 comment:

It was icy and wet outside. Snowflakes floated down but the ground was mostly just soggy. The temperature didn't reach 2 degrees. The hothouse was more like an icebox. The chooks were locked up in their warm, dry shed. We lit a fire early and kept it fired up all day. It was a perfect day for baking: hazelnut and chocolate biscuits for afternoon tea and fish pie for dinner. 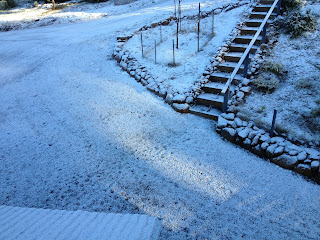 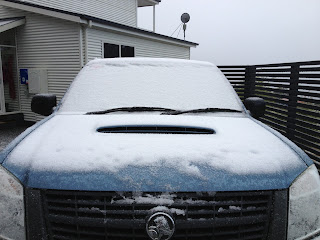 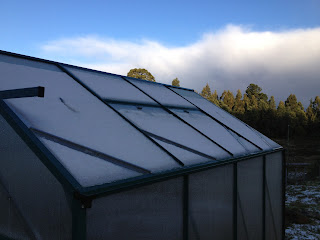 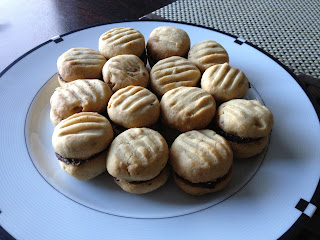 The business of farming

As local chef and restaurant owner Steve Cumper pointed out last week, much of the publicity about Tasmania's agriculture sector goes to the small, niche producers. He's right. I really love what small landholders are doing here, whether that's raising heritage livestock breeds, growing delicacies like mushrooms, wasabi, saffron or truffles or supplying fresh produce to local consumers via farmers markets. However, those we don't hear about so much are the bigger farmers: those with substantial landholdings and diversified businesses, who sell their high volume of produce into mass markets. Those we might call an 'agribusiness'.

Recently I was lucky enough to visit Elverton, a 3000+ hectare farm at Blessington in northern Tasmania, the property of a fellow 2013 Tasmanian Leaders program participant Adam Dickenson and his family. I learnt that managing a farm like this is not too different from running any other complex organisation. The business incorporates beef cattle, lambs, private forestry and crops. It's a constant battle planning for the future of each of these 'business units', anticipating consumer demand, the regulatory environment and of course the weather. There are staff and investment decisions to be made.

It was interesting to see how the farmer manages the asset he is responsible for. Their care for the soil, water, plants and animals while planning for the farm's future viability is very impressive. When I heard about the days spent hand-weeding the land and the creeks and the North Esk River that runs through the property, I suddenly felt ashamed of the Spanish Heath infestation on our own tiny nine acres that I haven't even started to deal with properly. Unfortunately, it needs to be managed in much the same way - hand weeding in conjunction with cut-and-paste of herbicide on larger plants.

The views at Elverton are stunning and the history is fascinating too. Many Tasmanians will know the area from driving through it on the way to Ben Lomond National Park. The historic farm buildings are a tribute to the hard work of previous generations, while the 'tiger tree' stump that Tasmanian Tiger heads were once nailed to is a stark reminder of how things once were. The Tasmanian Tigers now carved into the stump by chainsaw act as a constant motivator for the current generation of Dickensons to ensure a balance between environmental, economic and community outcomes. Their philosophy is that a good farm management decision is one that will benefit their grandchildren.   Here are a few photos from our visit. I hope to get back up that way and see more of the area. 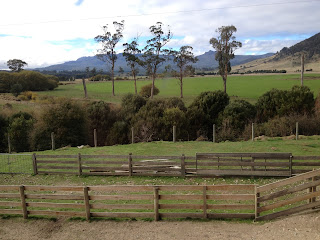 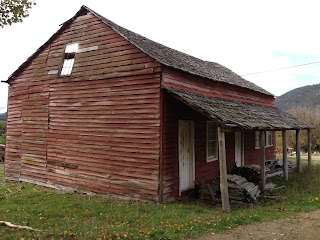 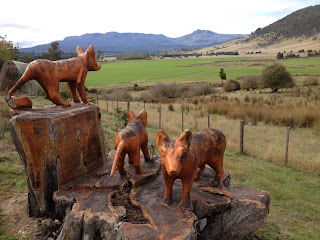 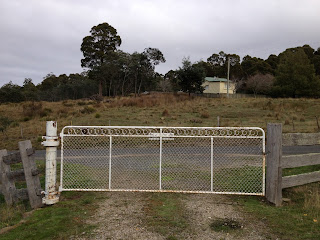 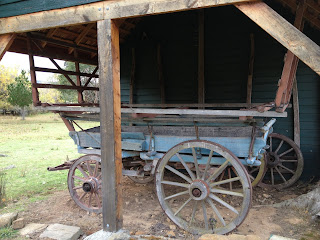 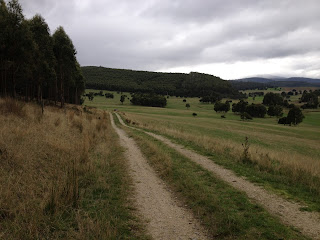 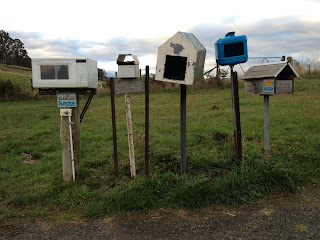 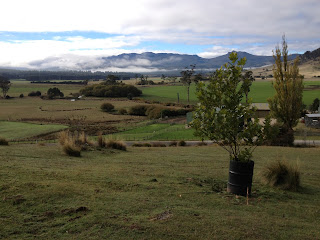 Posted by Susan Moore at 7:39 AM No comments: