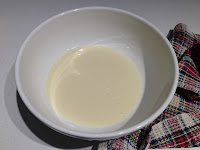 This morning my friend Cheryl popped over to give me Herman, a sourdough starter for a German friendship cake. It's a cute idea. You feed and care for Herman according to the instructions, and then after 10 days he gets very hungry and you feed him apples, raisins and much more besides and he turns into a cake! If you live nearby and would like a Herman of your very own to care for, please let me know and I'll drop him over next week once he's grown a bit.
Posted by Susan Moore at 7:30 PM 3 comments: 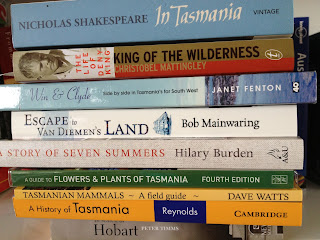 Over the past couple of years I've been slowly reading my way through a small pile of books about Tasmania or written by Tasmanian authors, in the hope of understanding my new home better. I've only just scratched the surface really, but the latest I've read are:
One of my favourites so far has been In Tasmania by Nicholas Shakespeare. I love how he tells pieces of Tasmanian history through his own journey to discover his past in Tasmania. Plus the two elderly sisters he meets living in Tasmania's north west are such brilliant, memorable characters. I learnt quite a lot about Tasmania's history through it. And more about the Hobart psyche in In Search of Hobart by Peter Timms. The Sound of One Hand Clapping by Richard Flanagan is not the most cheery book, it must be said, but a good read regardless. Aside from the novels and history books, I've enjoyed Matthew Evans' cookbooks, especially Winter on the Farm (have cooked many things from it already) and the reference books on Tasmanian birds, mammals, flowers and plants.

Where to buy Tassie books: well, anywhere really, but they have a great selection at Fullers in Collins Street,   The Hobart Book Shop on Salamanca Square (I met the owners' son in Sydney this week) and of course at Just Tassie Books in Elizabeth Street (they also sell at Salamanca Market on Saturdays). The shop at Hobart Airport usually has a good selection as well.

What's your favourite Tassie book?
Posted by Susan Moore at 7:30 AM 1 comment: 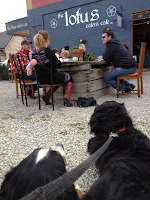 This morning's general meeting of the Huon Valley Dog Walking Association marked almost a year since the group started. We joined primarily to ensure that our dogs get on with other dogs and are not always walked on their own. The association is working with the local council to ensure that there are enough safe and accessible dog exercise areas in the Valley, something I wholeheartedly support. There should be some good news on that front soon... I also think it is important to promote responsible dog ownership. A well cared for and socialised dog is nice for people to be around (and pat and cuddle) while unsocialised dogs are a nuisance to everyone.

Last Sunday we walked with the lovely people and dogs from the HVDWA around Cygnet after the Sunday market, concluding with coffee on the apple crates outside The Lotus Eaters cafe. Very pleasant indeed. If you live in the Huon Valley and own a dog why not come along and see what it is all about? More info here and at the link above. 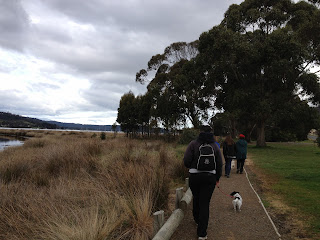 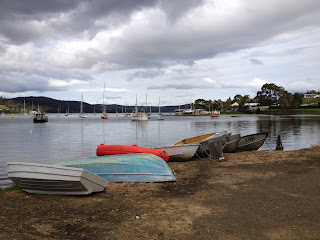 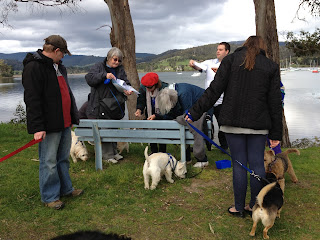 Here's Sleeping Beauty, the lovely collection of mountains we can see every time we drive to Hobart. 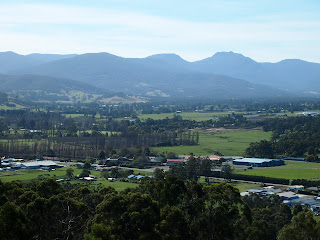 Today I stood on her nose. I originally wanted to climb up to Collins Bonnet from Mountain River, but descriptions of the very long and steep climb up a rocky fire trail put me off. So I set off from the Big Bend on Mount Wellington. It was a beautiful and varied walk, including icy fire trail, wet alpine rocky bits, rock hopping and scrambling, duckwalk and overgrown scrubby sections. I think it was about 16km all up and about a 700m climb - my mobile phone conked out so my Runkeeper tracking stopped a couple of kilometres early. 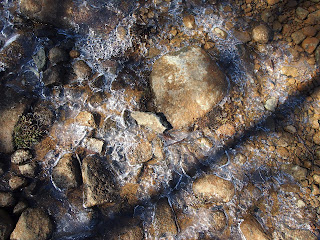 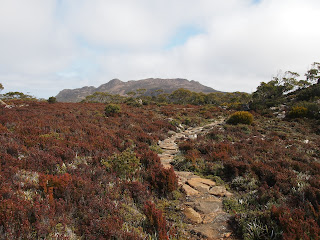 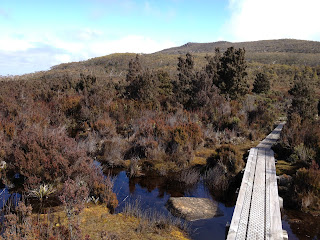 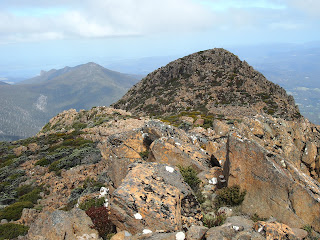 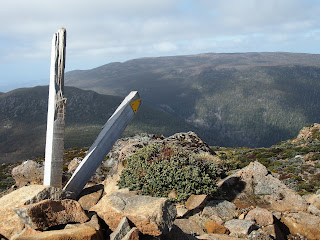 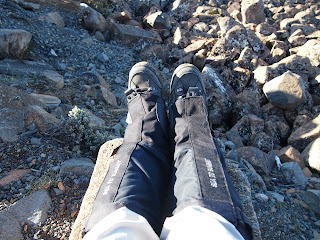 I travel quite regularly to Sydney for work and never tire of the view flying into Hobart. Unfortunately it's usually dark when I return. However, over the past year or so I've been lucky enough to have a clear daytime view of a snow-covered Cradle Mountain National Park (coming in from Melbourne), Maria Island (as in the photo below that I took last month) or best of all the stunning view of Freycinet, Coles Bay and The Hazards while descending into Hobart. 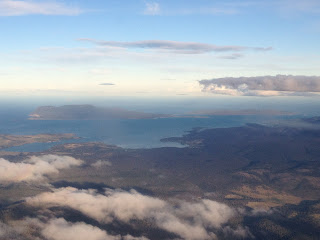 Tip: choose a window seat on the left side of the aircraft (seat A) flying in to Hobart.
Posted by Susan Moore at 10:36 AM No comments: 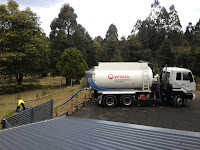 A visiting plumber recently alerted us that it was probably time to get our septic tank emptied. Joy. But actually I like the fact that our water goes back into the ground after filtering through the tank, rather than using mains sewerage services. The run off area has very green grass and I'll be planting some new bushes on it this year. The truck showed up and in no time at all was gone again. Phew.
Posted by Susan Moore at 7:00 AM 5 comments:

Our handsome but silly rooster, Russell 'fighting around the world' Crowe, has been living up to his namesake's reputation. Yesterday we heard him crowing from the neighbour's place across the road. Now, our neighbour has a white and grey cockerel so large that when we first moved here and saw him at a distance we thought it was a turkey. So our Russell has decided to go over and take him on. When we went over to check up on him, the males were facing each other, heads down and ruffled feathers standing up around the neck, jumping and kicking at each other. Great. Luckily no-one seems to have sustained injuries, and this morning Russell headed straight back over the road to start another fight. I'll have to keep him locked in if it becomes a problem.

P.S. You should watch the South Park trailer at the link above. You really should.
P.P.S. Here's a short video of Russell doing what he does best.

Like someone had flicked the switch, yesterday we woke up to this: 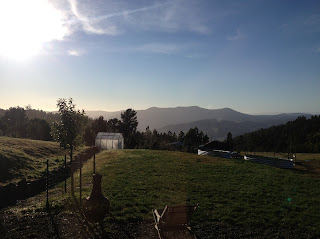 We had a full day of lovely sunshine and cool temperatures. I set out on a long-ish walk, almost 17km from the centre of Huonville to Lower Longley, where I hopped on the TassieLink bus back to Huonville. It was a little adventure of the sort I love, going up tracks and back roads, checking on my map and my phone if I'm going in the right direction to get to the desired destination.

I have (perhaps foolishly) signed up to walk in the Point to Pinnacle in November, a 21km walk from the Wrest Point Casino on the Derwent River up to the top of Mount Wellington at about 1270 metres. So I need to practice hiking up (large) hills. Yesterday's walk had a total climb of 902m, according to the Runkeeper app I used to track the walk on my phone. The big hill was up Knights Road from Huonville, plenty of huffing and puffing there.

The best part of the walk was the many views of snow-capped mountains in the sun. I saw Hartz Peak and Mount Snowy, what I think was the Picton range and Mount Snowy and then finally Adamsons Peak and The Calf in the south. Stunning views which my phone camera really did not do justice to. 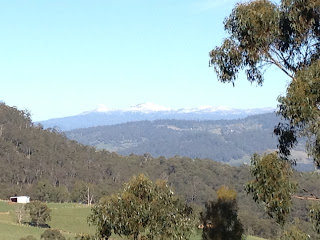 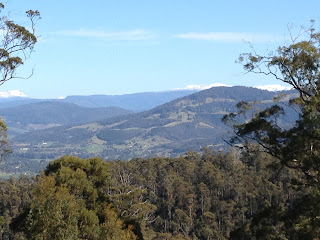 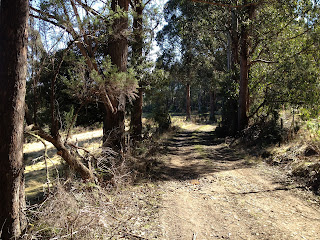 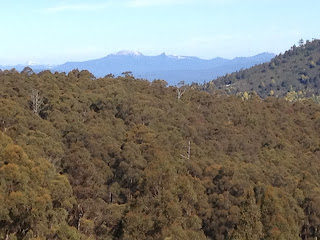 Posted by Susan Moore at 9:59 PM No comments: