I don't think I had ever been to a quiz night before I moved to Tasmania, but in the past 18 months I've been to four. They seem popular in winter, dragging everyone out of their cosy homes to share a few laughs, a couple of local ciders or ales and some food in a large room with a wood fire burning. I don't know if it's a Tasmanian thing or just more common in rural communities where people are more inclined to make their own fun.

The first one we went to was a fundraiser for the local Landcare group, held in the cricket club hall at Castle Forbes Bay. Back then we did not know many people here, so we were seated at a table of people we didn't know, and ended up having a hoot of an evening and meeting some great people. We had no idea when it came to the 'local knowledge' questions. And who knew that Elvis Presley's favourite singer was Roy Orbison?

The second quiz night we went to was held in the supper room in the Palais in Franklin, in aid of the Living Boat Trust. We had a great evening, despite our complete lack of maritime knowledge. The quiz ended with drunken renditions of sea shanties, and sad to say, I think our table won that round.

Then on Friday night was the best quiz night of all - the inaugural Pig Day Out (see, I'm already hoping it becomes an annual event) at the Red Velvet Lounge in Cygnet. We feasted on local smoked salmon and wood-roasted free-range pork, followed by rustic apple pie and cream, washed down with crisp Bligh's cider. It was kind of funny to meet and have dinner with a group of people we only really know from their blogs and from Twitter. I once heard that part of the definition of a 'digital native' is having at least 10 friends who you met online before you met in person. I think our count would be much higher than that.

Unfortunately I was no help at all in the music quiz. The music was most definitely not from 'my era'. Somewhat embarrassingly, the only question I got before anyone else on our team was a 'name the tune', Careless Whisper by George Michael. Oh dear. Lucky I confessed upfront that all I know is 80s music, plus a little 70s disco! Our team was suitably named 'The Porkers' after the band on David's shirt, and after a loss in round two, we came through in the third round to win. I use the word 'we' loosely. Actually the competition was almost single-handedly won by just one person on our team, with some assistance from his lovely partner. All up, an absolutely lovely night with great company and an extremely full belly. Brilliant local fun. 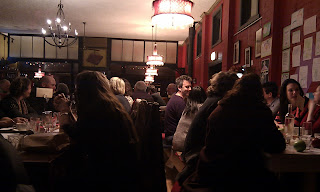 Posted by Susan Moore at 9:04 PM No comments:

I love how the chooks follow me around when I'm out in the yard. I can hear them running behind me and chatting as I walk. 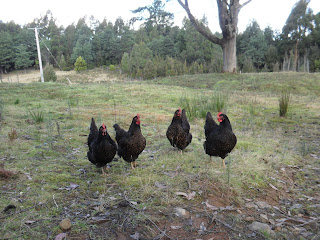 They are doing a very good job of laying. On Sunday night I made orange chiffon cake, which used five egg yolks and eight egg whites. Tuesday we had quiche - it was very yellow and delicious. This morning, it was perfectly runny boiled eggs, cooked in my trusty German egg boiling machine. David likes soldiers. Mine is grain toast with egg squished on top. 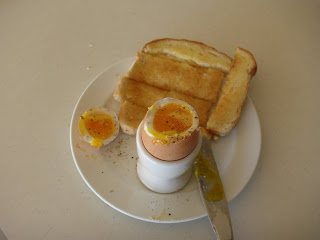 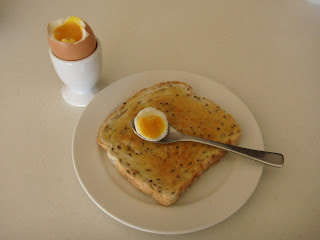 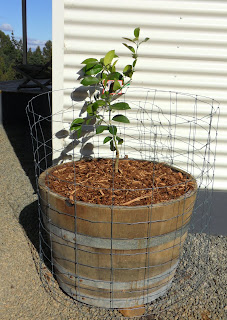 Peter Paul & Mary must have been on high rotation at home in the 70s...

The newly planted dwarf Meyer lemon tree is enjoying its place in the half wine barrel in the sun, behind its wire dog protection.We have had glorious sunny weather over the past few days. Hope it likes the spot enough to provide lots of fruit.
Posted by Susan Moore at 10:00 PM No comments:

Around 440 extremely fit people took part in today's Winter Challenge in Franklin. Run by Kris and Imogen of Endorfun along with many helpers, the event consists of a 10km run, 18m mountain bike (both courses steep and muddy), 37km road bike and 11km kayak. Some people do all four sections, others compete as teams of two or four. Last year, we volunteered as marshals and were stationed on Swamp Road on the uphill mountain bike leg. This year we were posted on Hope Hill behind the Franklin township, at a farm gate where athletes were coming down a steep and muddy hill towards the end of the run leg. It was amazing to see the different shapes and sizes - tall and lanky, short and stocky, young and old(ish) - but all so fit and determined. The last bloke to come through was running backwards! He had a nasty injury but was determined to complete the run. 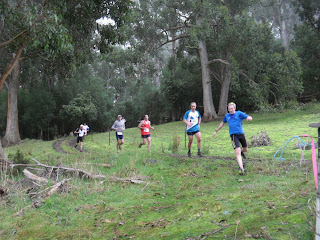 Once the track was clear, we closed the farm gate and moved downhill to where we had left the truck to watch the mountain bikes coming down another steep and muddy section. We saw a few come a cropper - one bloke tumbling head over heels on the bike - but all just got up and kept going. Amazing. 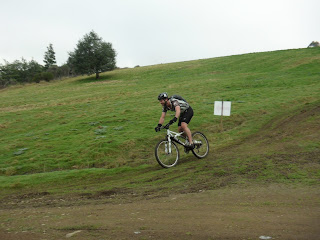 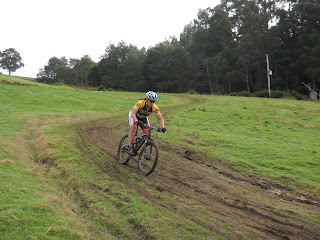 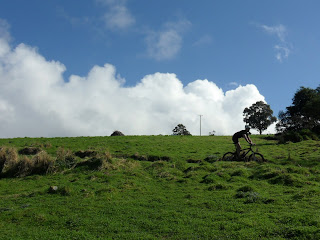 After a foggy start, Franklin turned on some glorious sunny weather for the crowds along the foreshore watching the kayakers come in. Once again a terrific and well run event. 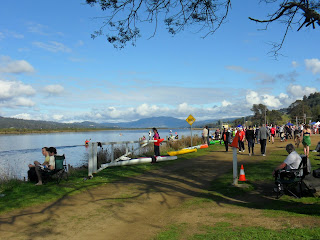 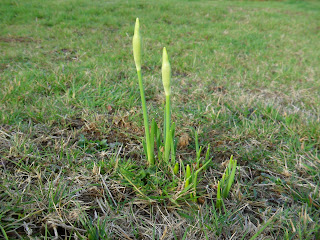 Down in the valley, there are trees in blossom already. Up here on the hill, things are a little slower to start. But this week, clumps of daffodils have started to spring up in the paddocks again. The sun is shining. The grass has started growing again after the last lot of rain and David has had the ride-on mower out again. And the bees are buzzing. I'm sure we haven't seen the last of winter yet, and there may be more dumps of snow to come, but it's nice to see the small changes already. I really love the seasons in Tasmania, each one brings such different things to enjoy.
Posted by Susan Moore at 3:17 PM 1 comment: 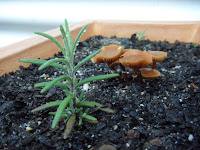 I love how the random fungus that has sprung up in this pot is almost as big as the rosemary grown from seed has managed to get so far. There's more in the apple crate vegetable gardens too. Hopefully spring will fix that.
Posted by Susan Moore at 8:11 PM No comments:

When I see a hill, I want to climb it. It's partly simple curiosity about what might be up there, partly just because I like the views, and partly just for the challenge and being able to say "I made it". Yesterday, I walked up a big hill east of Huonville that I've wanted to go up for ages. The red gravel road can be seen from the centre of town, snaking it's way up the hill. A large yellow boom gate marks the start of the very steep climb up to the  end of Knights Road. On the way back down I slipped and landed hard on my behind. Lucky there was no one around to hear me curse. So what's up the top? A lovely rocky outcrop commanding district views, but it's completely encircled by clumps of horrible prickly gorse so I couldn't reach it. Despite that nasty weed, a lot of tiny wildflowers were out. It's clear that a big fire has been through the area. It looks like Tasmanian Devils live up there somewhere, as I saw several sets of tracks. The views aren't bad either. The track I was on continued east on the other side of the hill. I suspect I could walk all the way to Sandfly or Margate from there. 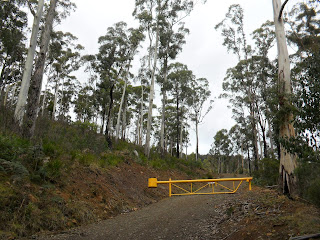 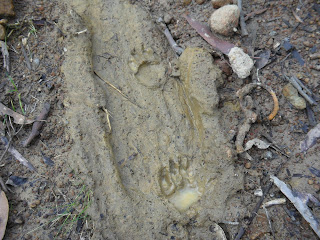 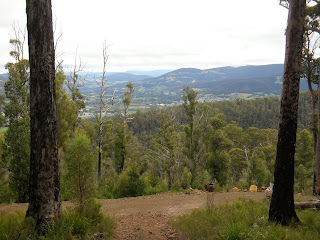 Last Sunday we FINALLY got to the Tasmanian Farm Gate Market in the Melville Street car park in Hobart. For some reason it never seems to fit in with our Sunday plans. But I'll make sure to go again... even though it was a drizzly morning, there was a wonderful range of produce for sale. If I hadn't been on the way to the airport, I would have gone mad buying vegetables. They just looked so fresh and lovely. I did buy some of Amanda's delicious pear and vanilla bean jam for my mum, and some Bruny Island Cheese to take up on the plane for friends in Sydney.

I bought a copy of 'Gourmet Farmer' Matthew Evans' new book, Winter on the Farm, as beautifully described here on Michelle's blog. And yes, I did ask him to sign it. Why not. I love that TV show. I love 'meeting' the people in it and drooling over the great Tassie produce it shows to the wider Australian audience. The new series starts on SBS on 25 August. Watch it, then buy your ticket to visit, you won't regret it. 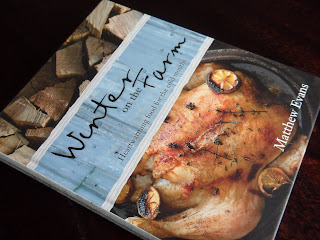 Posted by Susan Moore at 7:57 PM No comments:

Update: Comedy in (or near) the Valley 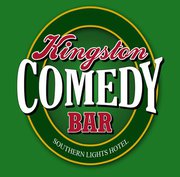 Wednesday this week saw the last Comedy Night at Brookfield Vineyard in Margate which I posted about recently... but the laughs don't stop there. From next month, a new monthly comedy room will start up in Kingston, at the Southern Lights Hotel. $12 at the door on Wednesday 7 September. Please get along to see some of Tasmania's best stand-up comedians and usually also a visiting act, who may be from Melbourne or as far away as Canada. If you are in Hobart, you can get to The Comedy Lounge at The Lower House the following night, for the same deal, same price. This week we saw musical comedy from Ryan Coffey who is very talented indeed. My face ached from laughing, a very good sign.
Posted by Susan Moore at 2:15 PM No comments:

Last weekend we went on a shopping spree at our local hardware store, Clennett's Mitre 10 in Huonville, because... I won a $300 gift card as a result of signing up to receive email newsletters from them! Lucky us. We've spent a fortune in the hardware shop since we moved here, at both the Huonville store and Fork in the Road at Kingston. I know it's the same when you move into any new home, but now that I've started growing vegetables and so on, it's even worse. In the old days, it was only David who was not permitted to enter a hardware store unsupervised (I was not allowed into Officeworks). Now I could go mad buying all sorts of useful stuff in there as well.

We bought a lemon tree, plant pots, some nice pruners, a small trowel for transplanting seedlings, potting mix, sand and mulch, pop rivets, a cordless drill, a poker for the wood fire... and no, it didn't all fit within $300 but the big discount most certainly helped. Thanks, Clennetts.
Posted by Susan Moore at 6:24 PM 2 comments:

Mostly in winter, the fog is way down below us in the valley, and we wake up to clear skies and frosty sunshine here up on the hill. But last weekend we were shrouded in grey cloud and misty rain. It was quite eerie. But the rainforest on our property loves it, and the rivulet is flowing strongly. 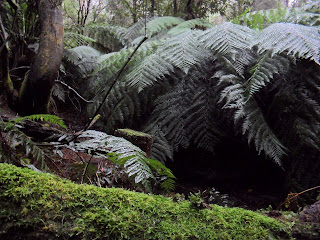 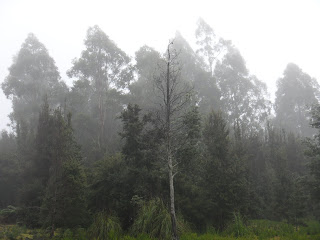 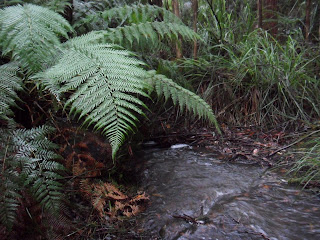 Posted by Susan Moore at 9:00 PM No comments:

This week's misty rain has drenched everything thoroughly... including the dogs. They've been sleeping inside, but on Saturday they were outside all day and this is what they looked like. Oh dear. What a sad picture. More than damp, that's for sure. Then I went to Sydney for work for a few days and left poor David to face dog toweling duties alone. It's hard work. 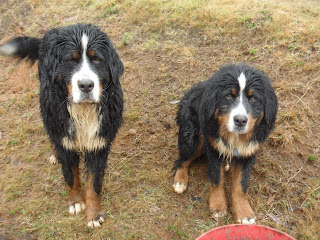