A couple of years ago, the beautiful Palais Theatre in Franklin went digital, replacing its classic reel to reel movie projector with a fantastic new digital one. Now, in its latest nod to modern technology, the Palais has added an electric vehicle charging point to the side of the historic building! What a nice idea. There's been a Tesla charging point at Willie Smiths Apple Shed in Grove for some time. I'm looking forward to seeing more electric vehicles on the road in Tassie, especially in the summer peak tourist period. 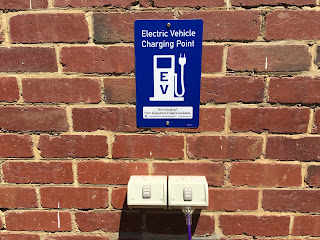 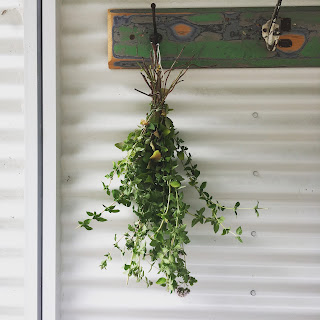 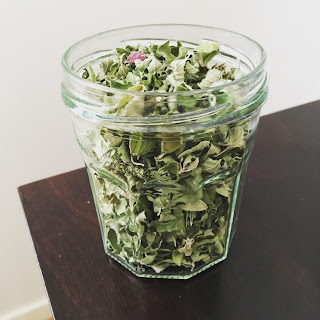 Posted by Susan Moore at 9:59 AM No comments: 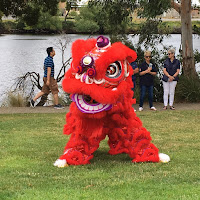 Happy lunar new year to our Chinese friends and colleagues! Last Sunday, Huonville was host to a performance by members of the Chinese Community Association of Tasmania. In the river foreshore park, we were treated to traditional Chinese songs (from the young lady in pink below), Wushu martial arts and of course, the famous dragon dance. A cute-as-a-button four-year-old girl stole the show as she practiced her martial arts moves in a striking red outfit. 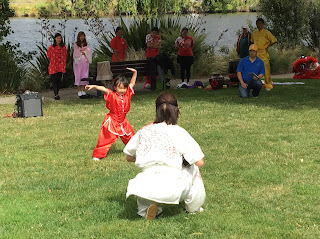 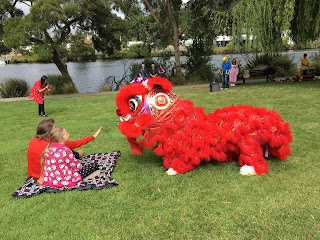 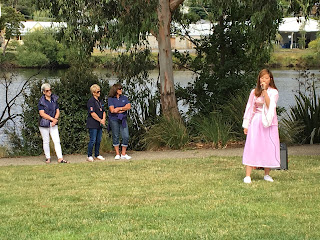 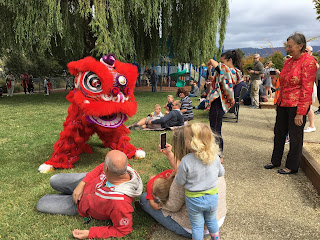 The group decided this year to take their traditions out to rural and regional areas in Tasmania, partly to share the celebrations and partly as a rehearsal for this Sunday's big festival performance on Parliament House Lawns. Red envelopes were presented to audience members who could answer some basic questions about lunar new year. I won a red dragon decoration for saying the traditional new year greeting in Mandarin. Well, kind of. As above.
Posted by Susan Moore at 7:50 AM No comments:

Distillery with a difference 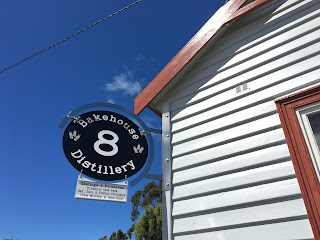 Tasmania now has at least ten whisky distilleries and quite a few making gin, vodka and other spirits. Recently, we visited one with a distinctly Tasmanian difference not all that far from home. At Bakehouse Distillery in Dover in Tasmania's far south, local blackheart sassafras leaves are used as one of the botanicals in their product Sassi Black. It's smooth and refreshing to drink, just what you'd want in something marketed as a digestiv or aperitif. We had a delicious platter of house-made breads, fermented foods like sauerkraut and smoked salmon to go with our drink. The distillery is open for tastings 4-6pm Friday to Sunday and 10am-noon on weekends, check them out on Instagram or Facebook. We'll be back with visitors someday for sure.
Posted by Susan Moore at 3:15 PM No comments:

At Hobart airport collecting friends after Christmas, I was browsing through the racks of tourist information pamphlets when I spotted this one suggesting a "Foodie's Road Trip" to Frank's Cider Bar and Cafe, which we are lucky enough to have at the end of our road. What stands out is that while of course they are promoting their own business, they've used valuable real estate on their marketing material to list other food and tourism businesses and things to do and see in our town of Franklin, Tasmania. Marketing the destination, not just themselves. Nice job, Frank's, that's the spirit. 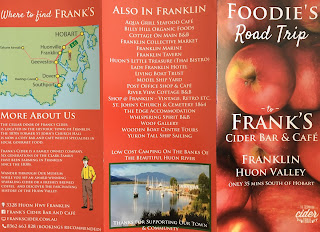