It was a day of big views, high winds and a little rain, perfect for some of the most dramatic Tassie landscapes. Everyone looks forward to this day on the Three Capes Track. Despite covering the longest distance, you can walk with just a light day pack for most of the day. And there's that sunrise over Munro Bight when you get up in the morning. 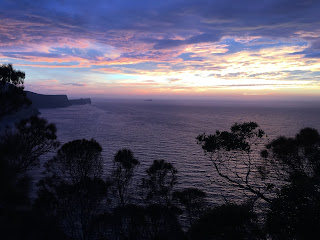 On the way out to Cape Pillar, there were more lovely track markers, with accompanying notes in the guide book, like these pretty mosaics. 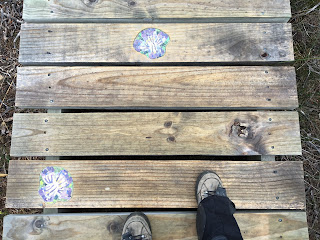 I thought I knew a reasonable amount about Tasmania's three varieties of snake. But thanks to the track notes to go with this track marker, I learned that Tasmania's snakes (and most other reptiles) give birth to live young instead of laying eggs like most snakes in Australia, an adaptation to the cold climate. So there you go. 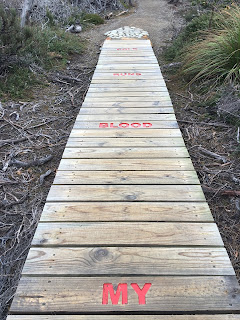 Soon after, the expansive views of dolerite columns appeared one after the other. 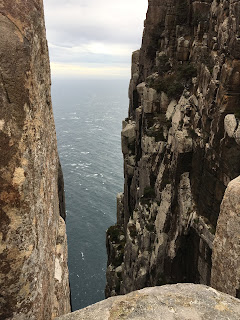 Here comes a Tasman Island Cruise, admiring the towering cliffs from below. 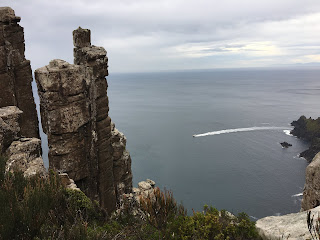 By far the best sight of the day has to be Tasman Island. Apart from being so striking, you can clearly see the lighthouse and other historic buildings and really understand just how difficult it must have been to get on and off the island.  Much easier in modern times with helicopters, though still a challenge with that wind! 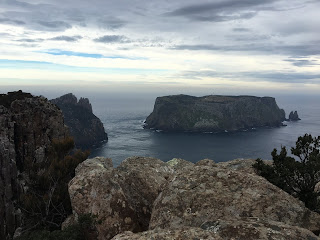 In some of the photos, it looks like we are looking down on the island. 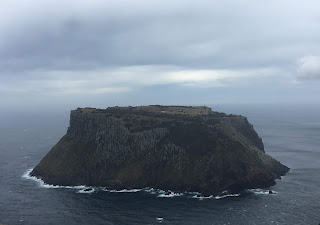 From The Blade at the end of Cape Pillar, you really are looking down on it. 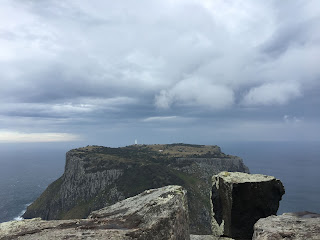 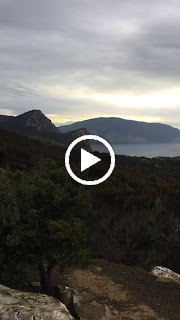 If you look closely you can see my walking buddies Jessica and Derren from Jakarta on their way up The Blade. 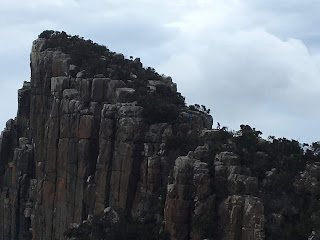 After a short 45 minute side trip to the end of Cape Pillar, it's back on the return journey. It's hard not to stop and take more photos of exactly the same things on the way back... well, I did in some spots. Back at Munro hut, I collected my (large) pack from the shed, charged up my near-dead mobile phone for a bit and visited the facilities (the next group of walkers had already arrived) before setting off to Retakunna Hut. It was only an hour or so down the track. 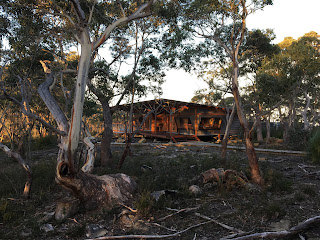 We all arrived before a rather chilly but glorious sunset. Our briefing that evening from Parks ranger Glen, a former professional fisherman, was a fascinating education in the nearby oceans. I learned that a 2 degree Celsius rise in water temperature in just a few years has led to the arrival of fish species never before seen this far south, and the death of the giant kelp forests, home and breeding ground for several important species not seen in the area since. He also told us about people who'd been lifted off their feet and deposited some metres off the track in the high winds on Cape Pillar! Having experienced a little of that wind, I totally believe it. Here I am with fellow walker Dave from Queensland, clasping on to a tiny tree on top of The Blade. 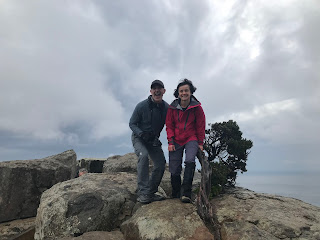 It was a chilly night, and we all needed to depart earlier than normal the next morning. After a short stretching or yoga session in front of the fire and eating our last evening meal together, I think we all slept well. 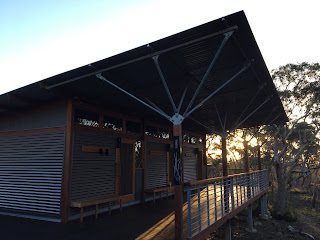